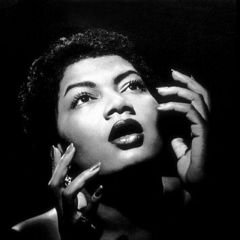 Hard to believe, but Richard Nixon once appointed an "Ambassador of Love". It was 1970 (after Woodstock, but also after Altamont and the Tet Offensive) and more unbelievable was just who he appointed . . . the sassy, sultry and sometimes topless vaudeville and cabaret star Pearl Bailey who had recorded albums in the Fifties and Sixties "for adults only".

The frequently raunchy Bailey had also a creditable mainstream career however starting in the mid Fifties when she played Frankie in the film Carmen Jones (her hit Beat Out That Rhythm on the Drum is terrifically catchy) and she went on to win a Tony award for her appearance in the stage production of Hello Dolly.

Five years before her death in 1990 at age 72 she also earned a BA in theology.

Quite some lady . . . and some of those "for adults only" albums were pretty tame. 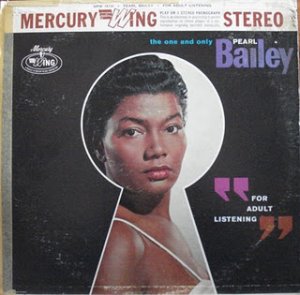 Despite the peeking keyhole cover art and titles like A Man is a Necessary Evil, There's Plenty More Where That Came From, A Porter's Love Song to a Chambermaid and That's My Weakness Now on the album The One and Only Pearl Bailey, the few songs with innuendo fall a long way short of really dirty blues (see here and here).

But her tough and trilling vocals are still quite something and she was a natural at swing in front of a big band . . . which might account for the song I Can't Rock and Roll to Save My Soul on the album which came out as Elvis Presley was sweeping all before him.

The key to her success she said "isn't the singing, it's the relaxing that does it".

The Ambassador of Love would say that though, wouldn't she?