Around the time of the launch of the first Beatles' Anthology collection in '95 – kicked off by the “new” song Free As a Bird – the lonely voices from the balcony became a chorus: Would Julian Lennon – who had now emerged as a fairly credible singer and songwriter – join the remaining Threetles as a kind intergeneration resurrection of the much loved band?

Mostly this was met by stony silence or a dismissively polite sneer by the surviving Beatles, but it did raise an interesting question.

Is genetics enough for the son or daughter of a big star to step into the shoes of their famous parent?

The various Marleys have mostly gone their own ways off the path father Bob carved out; Zak Starkey (who uses his given name not Starr) is his own man and has drummed with the Who for more than two decades, and sat in with Oasis; and tub-thumper Jason Bonham – who was 14 when his Led Zepp drummer/father John died in '80 – has played in a number of outfits . . . but often been associated with Led Zeppelin projects.

Of those three high profile offspring, Jason Bonham certainly believes his genes give him more credibility in the association with his father's work. Or at least his publicists do. 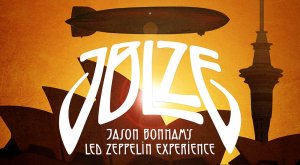 The promotion for Jason Bonham's Led Zeppelin Experience show – coming to Christchurch and Auckland in February – play up the father-to-son legacy.

An unattributed quote in the press release says, “There are many Led Zeppelin cover bands out there, but few have the blood of the actual original members flowing through them. This band has it, and you can tell. John Bonham would be proud of his son.”

And on stage the band play with huge back-screens projecting home and concert footage of John (aka Bonzo) and Jason Bonham, notably during the drum solo tour-de-force Moby Dick: “Footage of dad Bonzo at Led Zepp’s landmark Royal Albert Hall gig on January 9, 1970 rolls out, while Jason pounds out one of the most legendary drum solos in history in real time”.

Lest we be too cynical, it is worth noting that after the famous Zeppelin reunion show when Jason took to the drum kit on stage alongside Robert Plant, Jimmy Page and John Paul Jones, Page said afterwards, “Jason was absolutely monumental in his performance and his playing. From the very first rehearsal right through to the O2 –his knowledge of what made Zeppelin tick musically was incredible - it was wonderful to work with him and communicate musically with him. Nobody else could have done it.”

No doubt Led Zeppelin fans – who will search in vain on the website for JBLZE to find out the names of the singer, guitarist and bass player in the band coming here – will delight in this show.

But making that important point of difference is crucial, because the Auckland show appears not long after last night's almost-sellout concert at the Civic Theatre when the Stairway to Heaven Led Zeppelin Masters event brought out old fans (cue a Viagra joke from singer/mainman Vince Contarino) and some so young they probably weren't born when Led Zeppelin were inducted in to the Rock and Roll Hal of Fame in '95.

As much as the music of Led Zeppelin – yes, all the hits and more, with an encore of The Immigrant Song/Whole Lotta Love were there – it was the backing band which was the drawcard: here were the Zepp classics being given support by the Auckland Philharmonia Orchestra.

As many were noting and nodding, that might be worth the price of admission just to hear Kashmir.

That extraordinary song – in its original version, and this swelling and dramatic performance which opened the second half – was a standout.

But the concert began very slowly with the interminable and tedious Achilles Last Stand and an equally dull rendition of All of My Love.

There was little firepower, a lot of over-emoting by Contarino and the mix was all wrong.

The Zep Boys – as this band has been previously known when doing tribute shows – really needed to up their game because those of us in the Circle seemed to feel nothing much at all coming from them.

Aside, that is, from the two young drunk guys who sang along, gave more hip-hop hand gesture throwdowns than devil horns and thoroughly enjoyed the familiarity of the moment. They could barely stand and shout-spoke to each other through the quiet songs, . . . so not your average punters and quite uncritical.

However this slow start by the ensemble may have been a cunning ploy because halfway through the first set with Nobody's Fault But Mine and the orchestra-embellished Rain Song, things took a serious upward trajectory.

In the $15 programme (photos of the band, original Led Zepp on their Australasian tour in '72, a Zep crossword puzzle) Contarino is at pains to say this isn't a tribute band (they'd been that) but a new realisation of the Zeppelin songs with these orchestral arrangements. 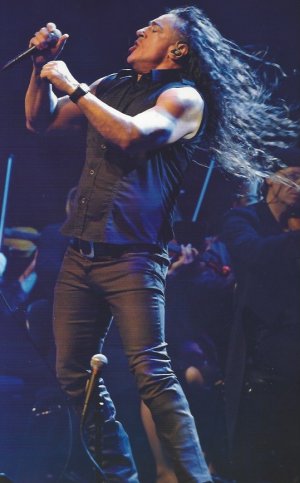 That said, at the end of the first half the audience responded with massive acceptance for Good Times Bad Times and Rock'n'Roll because of how closely they stalked the originals.

With the full orchestra and the band's sound kicked up two notches this was where the show truly came to life . . . then it was intermission.

A thrilling Kashmir picked up the energy again, then Over the Hills and Far Away, No Quarter and, yes, drummer Polain got to earn his keep on Moby Dick.

Was it any good?

Of course, he is powerful and technically gifted  . . . but as one who has always avoided Bonham's original I'm not going to comment on whether it was faithful or freewheeling. It was, as all rock drum solos are, much appreciated by the crowd.

A gentle Going to California took the mood down but – as with other songs in the set – you were reminded just how much of Plant's cod mythology and now dated poetry relied on his sheer force of personality and vocal mannerisms to carry them off.

Contarino had neither and so those songs came up short.

But into the final run were Stairway to Heaven then the singalong Black Dog (“Ah ah, ah ah . . .”) before it was all over bar the crowd-pleasing but unfortunately less distinguished encore.

The APO did the excellent heavy lifting on the night – the duet between guitarist Niko and principal violinist Miranda Adams going largely unnoticed because the spotlight stayed on singer Contarino – and their sound gave the concert that nudge into the sublime in places.

But often the dynamics were wrong – Zepp's sudden stops being played through by the strings, the rock band not loud enough – and while Niko is a fine hard rock guitarist he lacked any real character.

The thing about all those interminable albums of orchestrated rock classics – albums of orchestras playing the songs of the Stones, Beatles, Split Enz, Deep Purple, Zeppelin and whomever – is that there's no audience for them: the rock crowd don't want them and the classical people couldn't care less.

But, as was the case here, put the two together in a concert where it makes sense – the widescreen sound of an orchestra with the sonic punch of a rock band – and the results can be impressive.

Well, at least sometimes. (And we've previously considered why people go to such tribute shows.)

It will be interesting to see what kind of audience turns of out for the John Bonham Led Zeppelin Experience (sans strings).

The family connection will get it over a few hurdles anyway.

Speaking of which, here's a show to consider: a Beatles tribute feature Julian (now 14 years older than his dad was when he was shot) or Sean Lennon, Dhani Harrison (who has already acted as a surrogate for his father at the famous George tribute show), James McCartney and Zak Starkey.

Would you pay to see it?

What if they had an orchestra too?

I see the Bootleg Beatles are back soon. That's a good show. Honestly! Great concert, snare & lead guitar could have been a bit louder, correct about the spotlighting of guitarist.
Still, really good night. Loved the drum solo. Would go again.