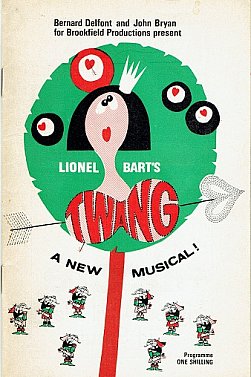 What could possibly go wrong? Here was a Sixties stage musical with music and lyrics by the proven hitmaker Lionel Bart and among the cast were the r'n'b/blues singer Long John Baldry (very popular at the time), Bernard Bresslaw and Barbara Windsor (famous from the Carry On films), and comedian Ronnie Corbett.

And who could not love a heretical, knockabout musical comedy which poked fun at the myth of Robin Hood?

With a title which captured the Swinging Sixties and two exclamation marks, Twang!! would seem too big to fail.

But it did and died in spectacular fashion.

It was considered the most expensive flop in West End history in '66 when it ran for a little over a month and closed amidst excoriating reviews leaving Bart – who had come off the back of the enormously successful Oliver! in '60 – out of pocket and heading for a decline into booze and drugs. 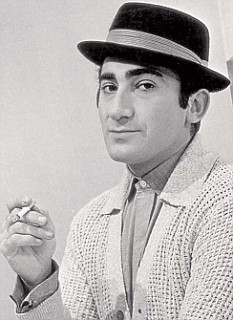 However Lionel Bart was not just a proven songwriter, he'd been hot for almost a decade.

In the Fifties he wrote Living Doll for Cliff Richard, Rock with the Caveman and Little White Bull (for Tommy Steele), the '59 stage romp Lock Up Your Daughters (which would seem to require an exclamation mark), the theme to From Russia With Love in '60 (sung by Matt Munro) and the enormously expensive but successful stage play Blitz! in '62 after his blockbusting Oliver!

Not a bad career for a man who couldn't read or play music, according to fellow composer Don Black.

He was connected and admired – his friend, probably lover, drug buddy and Beatles' manager Brian Epstein attended the launch party for Twang!! – and because the Stones' manager Andrew Loog Oldham was too young to sign contracts, Bart did . . . which made him technically a co-manager of Marianne Faithfull and the Stones.

He read some poetry at David Bowie's Haddon Hall.

Bart – born Lionel Begleiter in 1930, who took his name from St Bart's Hospital – was a unique and enormously talented figure on the British pop and musical scene.

In his 2009 book In The City; In Celebration of London Music, Paul Du Noyer said of Bart, “within his own lifetime, Bart connects the interwar Jewish life of Stepney with the post-war Soho of Tin Pan Alley . . . he was recognised and nurtured by Noel Coward yet he also managed (fleetingly) the Rolling Stones.

“He became a central player in the Swinging Sixties, socialising with Princess Margaret and the Beatles”.

All of this ensured he could get the financing for Twang!!

The cast could hardly be blamed, the problem lay in the script and the songs and the direction and . . . It was doomed from the start because when it opened for trial run in Birmingham the script by Harvey Orkin (who'd never written a musical before) was unfinished and after announcing it needed to be rewritten the director Joan Littlewood quit after a terrible opening night in Manchester.

There was bickering between various factions (avant-garde Vs establishment theatre people) and Bart – by most accounts boozed or on acid – seemed missing in action but firing off instructions to the various parties.

Other writers came in, the opening night in London was postponed for a few days and when it finally opened it tanked.

According to Michael Feiner in the Montreal Gazette at the time (that's how far and fast bad news travels), one reviewer said the only memorable tune in the first half had been God Save the Queen (before the curtain went up).

It was undoing of Bart who sold off the rights to Oliver! and his other works and his next production La Strada – a musical based on the bleak Fellini film, really? – opened without his songs and closed after one performance.

His physical and emotional decline continued into drugs and depression, and he was supported financially by friends and admirers.

Improbably a new version of Twang!! -- much changed from the original -- appeared to good notices almost 20 years after after Lionel Bart's death in 1999.

As Du Noyer wrote, “he died penniless, an alcoholic, a major talent whose best years were a very distant memory”.

And very few – because it lasted for such a short time – would remember the disaster that was Twang!!

For other articles in the series of strange, marginal or different characters in music, WE NEED TO TALK ABOUT . . . go here.

Subtitled “eccentric characters from New Zealand’s past” this collection of short biographical articles by Dunmore -- Professor Emeritus of French at Massey, Companion of the New... > Read more