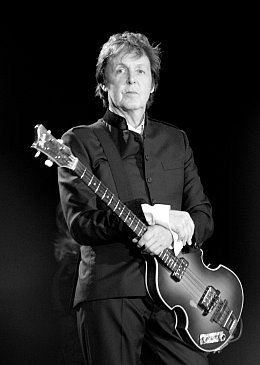 Since he got a new wife and a better dye-job, Paul McCartney has seemed happier, reinvigorated and enjoying being back in the frontline as a headliner (the Queen's Jubilee bash, the opening of the London Olympics) after some leaner years.

Speaking of which, McCartney today looks as slim as Cliff Richard – perhaps British war-baby deprivations prevented that generation ballooning up like Crosby and Still, look at Blackpool-born Nash in comparison.

And, at 71, he takes a better photo than most of his peers. (Vegetarianism?).

He's also more musically curious and productive across a wide spectrum from electro-experiments (as The Fireman with Youth), classical (five albums) and standards for Kisses on the Bottom, his last album. On it was one of the most beautiful ballads of his career for his new wife Nancy, the gorgeous My Valentine which slipped in seamlessly alongside the American standards.

McCartney latest album NEW is both a return to straight-ahead Macca-style rock and ballads, but – perhaps mindful he'd come off as desperate to be hip if he worked with The Avalanches or Jay-Z – the producers on NEW are the smart, young but respectful Mark Ronson, Paul Epworth, Ethan Johns and Giles Martin, the latter two sons of Glyn and George whom McCartney recorded with back in his first band. 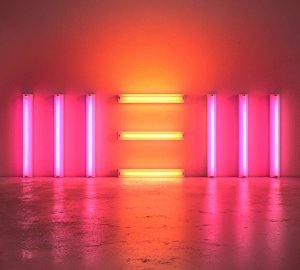 The result is an album which has its feet in the past – On My Way to Work which will be referred to as a cousin to Penny Lane although without the sprightly touch of that classic – but also has an ear on the present through slightly tripped-out electronica sonics on the broody Appreciate, the moody whispered verses on Road, and across Queenie Eye which could be from Magical Mystery Tour-era Macca.

On NEW some elements of the electronic experimentation he has explored as The Fireman – tape loops and such – are allowed to creep in within the pop context. And they work.

On his last pop album Memory Almost Full (2007) he included songs which sounded like an aural obituary (notably The End of the End with the lines “on the day that I die I'd like jokes to be told”). And again on NEW he gets reflective on the downbeat Early Days where he muses on those times writing with Lennon on acoustic guitars: “Everyone has their own opinion, of who did this and who did that . . . they weren't where it was at, they can't take that away from me if they tried, I lived through those early days”.

We might guess the Beatlesque title track (“you came along and made my life a song”) might also be about his wife and it closes with a Hello Goodbye-like coda which refers to Beach Boys harmonies.

So NEW is an album of interesting cross-referencing and some more than decent songs.

Say what you will about McCartney – and old Beatle fans seem the most critical, many constantly consigning him to “not as good” without bothering to listen – but he was a mainspring in band which redefined the possibilities of pop and rock, and in another that was massive in the 70s which we tend to forget. He's in the Guinness Book of Records as the most successful composer and recording artist of all time.

That means any new McCartney album deserves a fair hearing just to see what he's up to.

NEW doesn't coin any classics but a few bear serious comparison with his best work in Wings (to say in the Beatles would be pushing it too far). So there are some very good songs (especially the delightful Looking at Her), some make-weights (Everybody Out There is just stadium-pleasing stuff) and a few clunkers.

Hard to believe, but Sir Paul McCartney gets a good pass mark, even this late in life.

Much as though I would love to like this, it always seems to me that his voice is shot compared to the magnificence of Macca's voice in the 60s and 70s 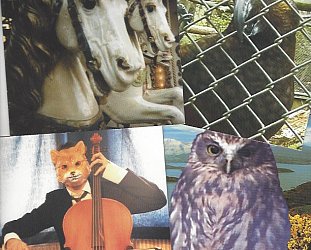 Some time between Elsewhere reviewing his latest album as The Cakekitchen, Trouble in this Town Again and him ending up in hospital with a broken collar bone, Graeme Jefferies kindly sent... > Read more