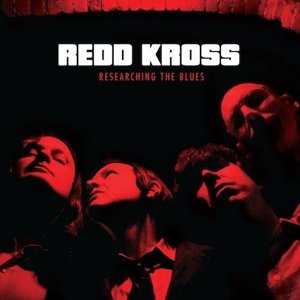 There are always those artists you hold an unnatural affection for: Elsewhere's list includes Pere Ubu, the Dwight Twilley Band, the Unforgiven, Bob Seger (before he went soft), the Rolling Stones (in the Sixties), the Chills and Clean . . .

And Redd Kross out of California who managed to weld power pop to indie-rock, like the Searchers or the Shoes on speed, urgency and the knowledge if this band thing didn't work out there wasn't going to be much else.

Somehow their early album Neurotica crossed our path so it was by happy chance that Researching the Blues – their sixth album – was pulled off the shelf at random for some consideration.

Our copy is in remarkably good nick despite multiple plays over the years and, despite the misleading title, this is enjoyably desperate, noisy pop-rock with song titles like Stay Away from Downtown, Uglier (pure garageband), Dracula's Daughters (a jangle pop ballad, that Searcher's connection), Meet Frankenstein, Winter Blues . . .

Fronted by writer/guitarist Jeff McDonald's slightly sneering and whiny (but strong) vocals, Redd Kross had it in them to be as big as . . .

Well, not Petty or the Posies but certainly someone along those lines, just more pissed off. Bigger than Greg Kihn anyway.

What they had going for them was a love of pop conciseness – the album has 10 songs in 33 minutes – and harmony vocals alongside the tough four-piece guitar-band attack.

At times you'd think they'd grown up on the first Knack album before discovering Big Star, the Cars and Cheap Trick (check Choose to Play for that touchstone). A kind of education in reverse.

Oddly though, this was their comeback album after Show World 15 years previous which was a lot of fun but never quite caught the public's imagination.

Researching the Blues certainly scored serious critical plaudits but it was something close to their farewell to recording.

There was another quasi-Kross album a couple of years later and although they – with their always constantly changing line-up behind Jeff McDonald his bassist brother Steve – continue to tour.

Power pop melodies and harmonies with an aggressive twist.

And that, to these ears, is timeless.

Very glad this one came to hand by a chance run of the finger along the thousands of vinyl spines on the shelves.