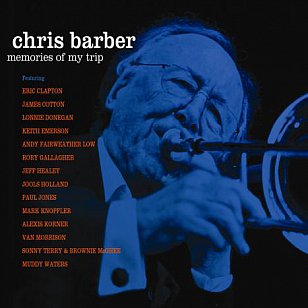 People like the great British bandleader/singer/trombonist and bassist Chris Barber were all but washed away when the British blues explosion and the Beatles/Stones et al came along in the early Sixties.

As one associated with British jazz and blues, Barber -- by then terminally old because he was in his early 30s -- just seemed like a man from another era. And he was: Lonnie Donegan's big skiffle hit Rock Island Line had come when Donegan had been in Barber's band. And in the face of Beatlemania and Get Off Of My Cloud, skiffle seemed old fashioned, quaint and vaguely embarrassing.

But Barber wasn't entirely forgotten because it was through his enthusiasm that many American blues artists came to Britain -- and inspired that generation which included Eric Clapton, Van Morrison, the young Rolling Stones and many others. The musicians didn't forget Barber.

Now 81, Barber gets this retrospective, non-chronological double album -- under an appropriate title -- as a look back on his remarkable life in music, and the guest list shows the reverence in which he is held.

It opens with Brownie McGhee from '59 singing the title track about what a great time he had in Britain when Barber brought him over, thereafter is Brownie with Sonny Terry.

Then there's a radio shot of the Barber band from '58, Eric Clapton from last year singing and playing on Weeping Willow with a small group and Barber on trombone . . . then Barber with pianist Pinetop Perkins (who died in March this year) on Kansas City from '79, with James Cotton and Alexis Korner in '61, playing bass with Rory Gallagher in '90 on Can't Be Satisfied, with Donegan and a band on Diggin' My Potatoes in '87 (very funny intro), with Jeff Healey (2006), in a bracket with Van Morrison (from '98 and '76), with Paul Jones, Andy Fairweather-Low . . .

And that is just the first disc.

On the second the guests include Keith Emerson on organ from '66 (yes, of Emerson Lake and Palmer), fellow trombonist Trummy Young in '78,  Sammy Price ('69), two from last year wth Jools Holland, with Mark Knopfler in 2000 . . .

It's fair to say this a pot pourri of jazz and blues styles (and of variable sound), but it tells you a lot about Barber that he was at home in them all, and with all these very different musicians and personalities.