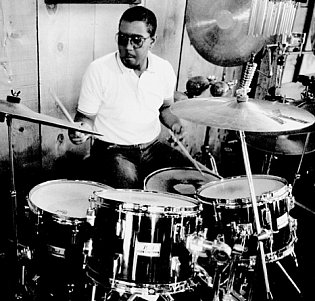 Because I always worked as a journalist, even if it was in the world of music, I never considered myself part of the music world. I was always only ever the “outsider”. The observer and reporter from their worlds.

And so, as such, I never wanted nor made the mistake of being a “friend” of the many – indeed many hundreds – of creative musicians I was fortunate enough to spent time alongside while they worked or relaxed, were interviewed or whom I sometimes travelled with.

Their world was not mine, and on those rare times when my profession as recorder/writer blurred – and I freely confess that drugs and stupidity on my part were sometimes involved – not a lot seemed to be relevant: not for me as a reporter nor for the readership I was wanting to engage.

One thing I knew before I entered that world – and I was a healthy thirtysomething with three children before I engaged – was that the drugs were only of interest to some writers looking for an angle, much more so than the artist. I only very rarely mentioned them, and only in the service of the story I hope.

I also didn't “hang out” with musicians as much as many of my readers might have thought, and when I did I was always scrupulously off-duty.

But one night back in the late Eighties, I went to drummer Frank Gibson's huge house in Onehunga for a party. It might have been Frank's 40th and there was a lively and interesting cast of jazz musicians, most of whom I knew and had written about and reviewed.

I recall it is a great night of laughs, a little smoke and a few drinks. Nothing as wild as some might expect from jazz musicians.

There was, inevitably, some great music played but one album stood out because I'd never heard it before.

My recollection was Marvin “Smitty” Smith's debut album Keeper of the Drums in '87 had only just been released and I'd never heard of the guy.

It was saxophonist Brian Smith who was enormously enthusiastic about it, if I remember correctly, and as we listened those in room fell silent or made approving noises.

I bought it as soon as I could afterwards.

In many ways the album has an air of ordinariness about it: It was on Concorde which was a fairly conservative label; it had none of the cachet of being neo-con in the Wynton Marsalis sense and drummer Smith had one of those privileged backgrounds of dad a drummer, high school bands-to-Berklee then playing with well established players in and around New York (Ron Carter, Frank Foster, Ray Brown, Art Farmer and so on).

The cover was also very ordinary.

But what a band! And what great straight-ahead, tightly executed music.

Smith was so well respected he could enlist alto/soprano saxophonist Steve Coleman, trombonist Robin Eubanks, pianist Mulgrew Miller, tenor player Ralph Moore, bassist Lonnie Plaxico and trumpeter Wallace Roney, most of whom I would get to see live in New York not long after.

This was a killer band of integrated professionals who – across eight Smith originals – worked what the respected critic and liner note writer Gary Giddins called “the taut, diverse themes and voicings”.

And that is what is impressive about this album even now: the players slide in effortlessly alongside each other on tunes which have the kind of sensitively layered arrangements you might expect from previous generations. 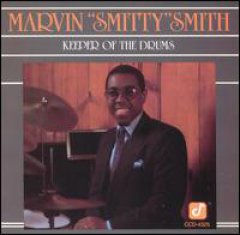 Around this time Smith was regularly picking up those “talent deserving wider recognition” comments which Downbeat magazine awarded and he played in Sting's band on a South American tour.

You got the sense from his playing that he could fit in anywhere, so it's no surprise that today he has been a regular in the Tonight Show band and has appeared on over 200 albums.

Oddly enough he only released two under his own name, Keeper of the Drum and The Road Less Travelled in '89.

But as Keeper of the Drums evidences, Smith was a team player and this is music where everyone gets equal space. At time you could think it was a Eubanks, Miller or Coleman album.

The context is thoughtful post-bop but without erring to that often respectful but unchallenging neo-con version which had blighted so much of the early Eighties and stunted some often promising careers.

The players on Keeper of the Drums were not going to be brow-beaten by the Marsalis programme because they had history on their side. Steve Coleman might have only been in his mid 20s, but he'd learned the tradition through Sonny Stitt, had played in bands fronted by Thad Jones/Mel Lewis, Sam Rivers and Cecil Taylor. With his group Five Elements he also had four albums of his own by the time he played on Keeper of the Drums.

The stories of the others is similar: Eubanks (brother of guitarist Kevin) was part of the pioneering M-Base collective with Coleman, Greg Osby and Cassandra Wilson; and pianist Miller – who died in 2013 – came up through the church, was on-call for Mercer Ellington's Duke Orchestra and had been in Art Blakey's Jazz Messengers.

London-born tenor player Moore had been in the Horace Silver Quartet, the Mingus Dynasty and at the time of the Keeper sessions was about to join the Dizzy Gillespie Reunion Band. Bassist Plaxico had played with Wynton Marsalis and also the Jazz Messengers but had hooked up with M-Base, and trumpeter Roney learned from Clark Terry, Dizzy and Miles Davis (Davis' only student) then joined the Jazz Messengers.

This was a band of equals who had much in common.

And that is what you hear on Keeper of the Drums, which unfortunately is neither on Spotify nor iTunes. It is however available through Amazon.

It's a rare album in that it plays its gifts close to the chest, but rewards repeat listening.

As it has had at my place since that party almost three decades ago.

I should hang out with musicians more.