Every year Independent Music NZ makes its classic record award to a landmark song, EP or album released on an independent label.

Into this company in 2021 comes the wonderful Poi E by Patea Maori, the first song in te reo Maori to top the New Zealand charts.

It was also a landmark record in that it's inspiration was born out of the relationship between the late Dalvanius Prime and the late Ngoi Pewhairangi, and the uplifting spirit which they encouraged in the small Taranaki town of Patea.

At the time Patea was reeling after the closure of the local freezing works and young Maori were leaving for work opportunities and the brighter lights of bigger cities.

Dal, a local boy himself who lit out for Sydney when he was a teenager and launched the acclaimed showband Dalvanius and the Fascinations, knew exactly what that attrition of youth meant for them.

They, as he had, would lose contact with tikanga and whanau, and many would struggle in the bigger cities and their concrete canyons.

With the inspirational lyrics of Poi E by Ngoi and Dal's relentless energy, his drive and musical professionalism, he took the song (and the local Maori club) into the studio to turn the waiata into a pop hit with synths and beats, and then took it to the charts and the world.

Literally: London and New York, just as Dal had promised them.

Dalvanius was more than a gifted musician, he was a visionary and Poi E wasn't the endgame but the start. 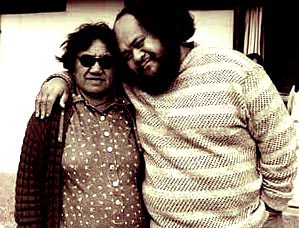 There would be an album (belatedly there was), there would be an animated television series of Maori characters (as per Joe Wylie's album cover art), locally there were would be market gardens (there was when he showed me around) and much more . . .

But the death of Ngoi – who had tutored him in te reo and been his rock – while Patea Maori were overseas set him back and some of the dream faded.

But Poi E endures as an uplifting, life-affirming song with a message for young Maori, a song with a special feeling of positivity and optimism, and a great video clip which was inclusive in a way we had rarely seen on New Zealand television screens.

Radio rejected Poi E because it wasn't in English, but once that clip on TV took off there was no holding it back.

Even now it would be a hard heart which could watch it and not raise a smile.

This really was New Zealand on Screen. And it was, of all places, Patea.

Ngoi said she likened the poi to that of the fantail which flies through the forest, and both to Maori youth trying to find their way in the concrete jungle of the Pakeha. It's a timeless song, and Taika Waititi reinvented it for a new generation in the closing credits of his film Boy (see clip right at the bottom)

Many people know the song but rather fewer know the words and their meaning.

Here they are . . . and we might guess that Ngoi and Dal are up there together holding hands, laughing and Dal saying, “So, what took you so long, eh?”

Here's the original clip and the lyrics are below it in te reo and translated.

Swing out rhythmically, my feelings

lean out beside me, so deceptively.

Swing round and down, spin towards me

Swing to the side: swing to and fro

climb up above, swarm around me

my whirling emotions, my poi, Yeah!

Oh my feelings, draw near,

Oh my affections, stick to me

Oh my instincts, take care of me

Oh my emotions, be entwined around me.