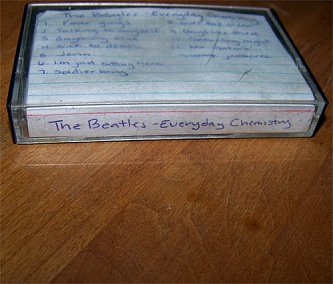 The story began on a desert highway in California on September 9, 2009 – coincidentally the same day the Beatles reissued their remastered catalogue – and it involved a runaway dog, its owner falling down and rendered unconscious then him waking up in a room with a guy called Jonas who told him he was now in a parallel universe.

And that's not even the weird part.

The fellow who told this story went by the name James Richards – not his real name as becomes obvious – and he went on to claim that Jonas told him the Beatles still existed (despite two of them being dead) and they were still recording . . . and he played Richards a tape of their recent material entitled Everyday Chemistry.

There were 11 new Beatles songs on the cassette (which Richards filtched a copy of) and Richards felt it his duty to make this material available when he was returned to our world, along with his story of Jonas and his odd time/space travel machine, the parallel universes, a bunch of unusual Beatle albums Jonas had . . .

And hence the Everyday Chemistry album with song titles like Talking to Myself, Anybody Else, Sick to Death, Soldier Boy and more.

Here's the really weird part though, the songs do actually feature the Beatles as you would never have heard them . . . unless you were in Jonas' parallel universe.

How could this be?

The songs are simply mash-ups of Beatles' solo songs. 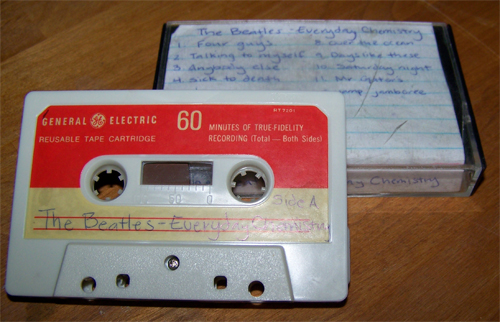 For example, Talking to Myself melds Lennon's I'm Losing You, Harrison's Stuck Inside a Cloud, McCartney' Uncle Albert/Admiral Halsey and Ringo's Early 1970. (There's a Wikipedia page here which deconstructs the samples.)

The idea isn't new as there have been plenty such mash-ups – not the least the officially sanctioned Love album by Beatles' producer George Martin's son Giles – but none have come with such a fanciful backstory.

Quite why “James Richards” felt the need to do this is also easy to explain, it gave the project publicity it never might have had when it was released, and it also allowed him to deny that it was a mash-up of uncleared samples by saying that in that other universe the Beatles never broke up . . . what in politics they call "plausible deniability".

That said, it's a very interesting mash-up compilation . . . and on Sick to Death embraces disco beats in the manner of a Stars on 45 dancefloor filler.

It's a fun album – more so than say Beatle Barkers and such – and you can actually download it for free from James Richards' website The Beatles Never Broke Up where he gives more detail on his remarkable story . . . which sounds a bit like it was inspired by Clifford Irving's hoax interviews with Howard Hughes as much as by a love of the Beatles.

Still, we here at Elsewhere who have perpetrated fake albums, a few by the Beatles, salute “James Richards” wherever he might be across the universes . . . and hope he passed the audition.