THE BEATLES' US ALBUMS REISSUED: How America misheard the Beatles

Thanks to record company exec Dave Dexter Jnr, Americans got to hear the Beatles . . . although if Dexter had had his way they might not have.

Dexter – the Capitol Records man charged with releasing non-American acts in the States – turned down the first Beatles singles on offer from the UK (Love Me Do, Please Please Me, Ask Me Why and She Loves You, plus their B-sides) and even dismissed I Want to Hold Your Hand.

He considered they had no commercial potential in the US.

It wasn't until Sir Joseph Lockwood, head of EMI, Capitol's parent company, insisted the group's songs be released that Dexter (a fan of pre-bebop jazz who prided himself of releasing a German beer drinking album at this time, and Freddy and the Dreamers) finally had his arm forced and started putting out the music which would change popular music forever.

By that time though the damage had been done and EMI, out of frustration, had turned to other US labels to release the Beatles' music in '63.

Which is why the first album of Beatles songs in the US was on the tiny, black-owned, r'n'b and soul label Vee-Jay label out of Chicago (after being turned down by Columbia, RCA Victor and Atlantic whose head honcho Jerry Wexler thought the music not “pure”).

Entitled Introducing the Beatles, it sold over a million copies and was released in January 1964, just 10 days before Capitol -- a bigger company with considerable chart clout -- finally got its act together and put out Meet the Beatles. 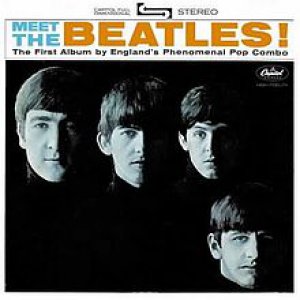 This starting point for US Beatle fans was a cobbled together album in Britain's With the Beatles album cover but which drew from Please Please Me (their first UK album) and added the hit single I Want to Hold Your Hand.

And so the story of mashed-up Beatle albums in America began.

That Dexter single-handedly determined what to release, or not – and no one else in Capitol even heard the Beatles songs when he declined them – is an extraordinary story. And not the least because it meant that until right up to Sgt Pepper's in '67 American audiences heard the Beatles in an entirely different way than the band intended.

Because Dexter had to play catch-up – and because American albums were driven by singles which he would include on the records he released – the track-listing of the Beatles' US albums on Capitol differs considerably from those Britain and the rest of the civilised world had.

Dexter was a money man too, and through complex royalty deals it was better business to put out shorter albums. So US fans were getting records with just 10 or 11 songs – many coming in at around just 15 minutes a side – as opposed to the British releases which had seven songs a side, and singles usually not on the albums. 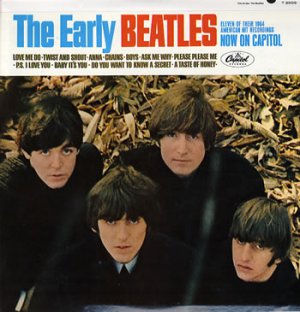 In the same period the UK released seven Beatles' albums, the US released 10 . . . all with muddled and different track listings.

It wasn't until Capitol released an album called The Early Beatles in '65 (in a cover from the same shoot as Beatles for Sale) that US audiences heard some of the songs from their UK debut album Please Please Me of two years previous.

And let's not even get started on how Dexter remixed some songs adding reverb, used different masters or created whole oddball albums like his US version of A Hard Day's Night – in the UK the first album of solely Lennon-McCartney compositions and with a brilliant second side – which had instrumental version of some songs.

Or the Dexterised Help! for which, overnight apparently, he pulled together to include non-Beatle instrumental passages he lifted from the film's soundtrack.

And Dexter also took cover credit for such things: Help! has on the sleeve “Produced in England by George Martin and in the USA by Dave Dexter Jnr”.

Have a listen to the posted sample track to hear how the US version of the Help! album started.

There were also double-ups: the Something New album included five songs which had been on the US Hard Day's Night just a month previous (but added Slow Down, Matchbox and the German-language  version of I Want to Hold Your Hand, none of which were exactly "something new")

Was Dexter an unmitigated villain then?

Yes . . . with a couple of small reservations. 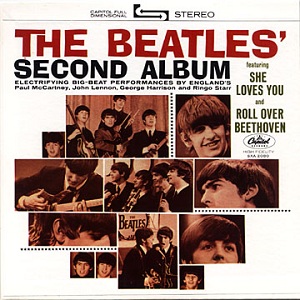 Given that even in the UK the early Beatles albums were hardly thought-out and coherent (the band had little say in their running order) then maybe we need to look at them for the US perspective.

The album which came out as The Beatles' Second Album (brilliant titles were not Dexter's forte either, and given the existence of the Vee-Jay collection this was actually their third) is a terrific rock'n'roll collection . . . albeit in a typically lousy cover. 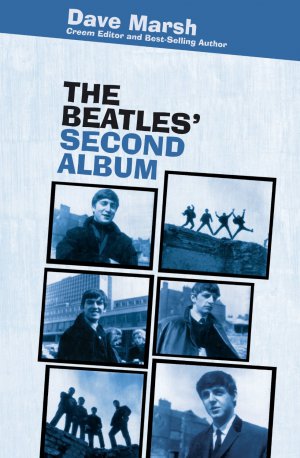 And the US rock writer Dave Marsh offered a wonderfully insightful and highly recommended little book about this album (to which Elsewhere is indebted for information and informed opinion) and what it meant to a USA audience (see right, and you can buy it here).

When you listen to this short (just 22 minutes) but dense album you can hear why US writers argued the Beatles were just giving them American music back in a British accent.

It opens with Chuck Berry's Roll Over Beethoven and includes their covers of You Really Got a Hold On Me (Smokey Robinson and the Miracles for Motown), Devil in Her Heart (the little known Donays), Money (by Barrett Strong, also on Motown), Long Tall Sally (Little Richard) and Please Mr Postman (more Motown from the Marvelettes) alongside their own hit She Loves You and other originals.

It's a great little rock'n'roll, soul and r'n'b album which favours Harrison over McCartney.

And the US version of Rubber Soul dropped the tough guitar opener Drive My Car in favour of McCartney's I've Just Seen a Face – and shuffled the track order -- so it was very much a folk-rock album, which actually captured the tenor of the times in the Byrds/Dylan era, even if it wasn't the Beatles intention.

Both of these albums are actually pretty decent stand-alone Beatle albums.

The US also got an intelligent Magical Mystery Tour album which had the UK MMT double EP songs on one side and contemporaneous material like Strawberry Fields Forever, Penny Lane and All You Need is Love on the other. That was sensible.

Last week the chance has come to hear just how America – through the agency of Dave Dexter Jnr then those who followed in his wake after his revisionist Rubber Soul – heard the Beatles. 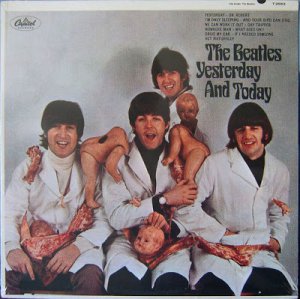 A CD box set of the Capitol albums has been reissued – which includes the cash-in on the success of McCartney's Yesterday on the album Yesterday and Today, which comes with a replica of the notorious “butchers' sleeve” photo. (Which was not, as some writers have suggested, their comment on the albums being chopped up.)

The US Magical Mystery Tour isn't included as it appeared in previously issued Beatles in Mono/Stereo sets, but here is how America did get the Beatles, just in a different way than the rest of the world.

Which is why when John Lennon would introduce songs on stage he would cynically joke about what album they came from.

Dexter – who penned a vitriolic personal attack on Lennon for Billboard at the time of his murder – oversaw the Beatles' American releases from '63 to '66, the most crucial part of their career. Even after his departure Capitol was forced to scramble to keep up with the prolific Beatles. It wasn't until Sgt Peppers (a hard one to mess with) that Americans heard exactly the same album as everyone else. 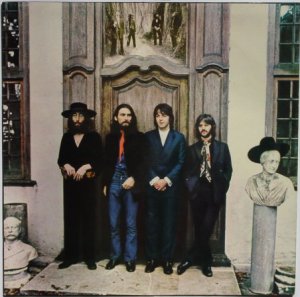 But then they got the Hey Jude album in February 1970, around the time McCartney announced the band was finished. In a cover shot the previous year, this oddity brought together recent material like the title track, The Ballad of John and Yoko, Don't Let Me Down and Old Brown Shoe with I Should Have Known Better from A Hard Days' Night six years previous.

Weird. And it was given vinyl release in New Zealand at the time, for some reason.

Beatles people have all these Capitol songs, but it's a fascinating sociological study – and insight into the mind of Capitol's arch-capitalist and director of international repertoire Dexter – just how America heard the Beatles.

Same but different, and it's that difference that makes makes all the difference. 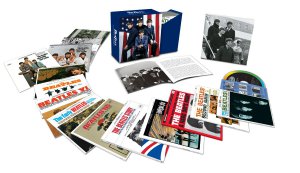 You won't feel you've missed anything by not previously having heard the incidental music by Ken Thorne from Help!

The Beatles US Albums box set – 12 CDs in replica sleeves complete with period-piece inserts which is a nice touch, plus the Beatles' Story, most presented in mono and “stereo” mixes – comes with a booklet which tells this strange story.

But nowhere in the essay does the name of Dave Dexter Jnr get a mention.

Ironically then, the man who rewrote history has now been written out of it.

You'd think after the Anthology (the CD, book and DVD collections), the Beatles catalogue remastered (in stereo and mono editions), the BBC albums and the recent iTunes-only Bootleg Beatles collection there must be very little left in the vaults to be issued. Don't you believe it: could there be Shea Stadium or expanded Hollywood Bowl live albums, an expansive release from the Let It Be/Get Back sessions, the final rooftop concert . . .?

I was tempted to buy this set but after Andy Gill's heartfelt column (reprinted in the Herald over the w/e) and your more sober assessment here I think I'll pass. I'm happy to have their songs in my head the way they (or they and EMI) intended. Incidentally, the 'Hey Jude' compilation was released just about everywhere - except the UK. I bought mine in Paris as it was unavailable in London.

I was interested in hearing these, until I learned that they don't use the Capitol mixes from the 60s (with all the reverb etc) but the 2009 versions. Effectively then, these are little more than playlists that can be put together in iTunes if you own the 2009 boxes. Artwork looks nice I guess! GRAHAM REPLIES: My apologies. I had actually mentioned that in my first draft but then idiotically edited it out while trying to get in the info about how botched up A Hard Days Night and Help! are. 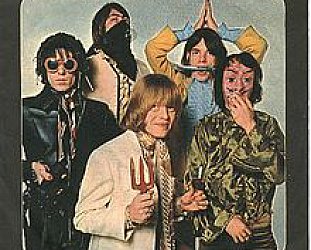 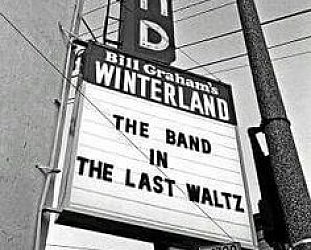 When The Band decided to call it a day in 1976 they did it in style. Not just any group could call in Martin Scorsese to film their farewell concert at the Winterland in San Francisco, or have... > Read more