Carlos Santana, who says rarely a day goes by when he doesn't listen to some Miles Davis, believes you only have to listen to the Davis' album Live at the Plugged Nickel -- recorded in December 65 at a Chicago club but not released until '68 -- to realise the trumpeter had exhausted standards such as Stella By Starlight and On Green Dolphin Street, and even his own classic So What (from Kind of Blue).

By the late 60s Davis, always a restless spirit, was looking around and listening to the sound of the street. Rock bands and soul-funk outfits were connecting the black communities and a younger generation in a way he, in his early 40s, no longer was.

Sly Stone and Jimi Hendrix had more to say to young people than he did, and in retrospect his albums such as Filles de Kilimanjaro and In a Silent Way of 69 edged towards electronics and the fusion with rock which would follow.

Encouraged by his younger wife Betty – a soul-funk singer who was also sharing her favours with Jimi apparently – Davis was introduce to rock music (Hendrix in particular with whom he was scheduled to record at one point). And with electric guitarist John McLaughlin and keyboard player Joe Zawinul recruited for studio sessions which became In a Silent Way, Davis began to break free of the constraints of acoustic jazz and standards.

And whereas in the past he would have producer Teo Macero wipe unused takes, in 69 he insisted Macero record and keep everything that happened in the studio. This paved the way for one of the most innovative and daring albums of Davis' career, Bitches Brew released in late 69 which saw him shear away from the jazz of the past.

Bitches Brew was the album – a double at the time in a cover by the same artist who had done Santana and Hendrix sleeves – which alienated his conservative jazz audience but took him to sharing stages with rock bands such as the Steve Miler Band, Neil Young and Crazy Horse, and Santana at places like the Fillmore East.

Yet Bitches Brew is not a rock album – although the way Macero pieced together segments of tapes from the sessions was increasingly common in rock after Zappa's Freak Out! of 66 and the Beatles' Sgt Pepper's of the following year.

The Brew music stands on a cusp between jazz and rock: evocative and atmospheric, edgy (angry in places even) and abstract. This music isn't, as jazz critic Greg Tate writes in the liner notes to the Legacy Edition reissue, “in much of a hurry to arrive anywhere, it creeps, unspools, staggers and sprawls in pursuit of an improvisational New Jerusalem more concerned with atmospherics and strangeness than momentum”.

For those who like their music to have resolution, Brew is still a tough call.

At the time the respected critic Ralph Gleason, a Davis defender, joked to Macero after receiving some advance tapes, “No wonder jazz is dead. Guys like you are killing it.”

Macero snapped back: “ I may have killed jazz, but I have established a new kind of music. What have you done lately?”

Where much of the fusion jazz of the 70s which followed – McLaughlin's Mahavishnu Orchestra often being a prime offender – was flat tack and headstrong, Bitches Brew lays out foundations slowly, the guitars, Davis' trumpet and the electric piano of Zawinul weaving stealthily.

This idea of double quartets had been previously explored by Ornette Coleman on his Free Jazz album of '61, but Davis wasn't seduced by the drama and sonic clashes of free jazz. Melodies were still important, although here they are often truncated, slide in another direction, are picked up by different instruments, left to hang.

The music on pieces like the 20 minute Pharaoh's Dance, the 26 minute title track and the 14 minute Miles Runs the Voodoo Down unrolls and weaves in and around itself. It was quite unlike anything else at the time, and very little since.

Because of that Bitches Brew – a masterpiece of assemblage by Macero who also employed loops, delays and reverb which were uncommon in jazz then, and are even today – has a timeless quality, unlike some of the urban funk Davis would pursue on subsequent albums like On the Corner which sound grounded in the early 70s. 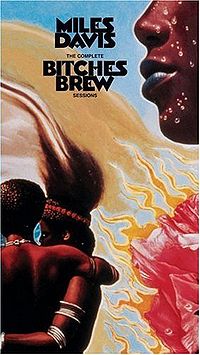 In 98 a four-disc set The Complete Bitches Brew Sessions was released (right), but that might be too much for most listeners.

The Legacy Edition is a double disc of the original album with alternate takes and single edits (proof to Davis' critics that he was trying to get to the pop market).

There is also a previously unreleased DVD concert film of a snappily dressed Davis in late '69 in Copenhagen with Shorter, Corea, Holland and DeJohnette playing some Brew material but also keeping one foot back in standards (I Fall in Love To Easily). The concert footage shows how hard this music was to replicate successfully on stage and confirms that Bitches Brew was a studio conception.

Later in life Davis took up painting and many of his works were acclaimed. Davis was a painter in sound also, Duke Ellington calling him “the Picasso of jazz”.

As Richard Cook and Brian Morton note in their Penguin Guide to Jazz on CD he left “some masterpieces, some puzzling abstract and a pile of fascinating sketches”.

The colourful, fragmented but unified and engrossing Bitches Brew is one of his masterpieces.