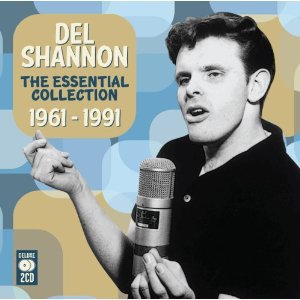 The dates on this collection look slightly strange: the start date is perfect (his classic Runaway and excellent Hats Off To Larry both date from '61), but a depressed Del  Shannon committed suicide at age 55 in February '90 although there had been rumours that through his friendship with Jeff Lynne he might have been invited to replace the late Roy Orbison in the enorously successful Traveling Wilburys.

But the final two tracks in this chronological double-disc are Callin' Out My Name and Walk Away which were indeed posthumous releases lifted from his Rock On album which was produced by Lynne and featured Tom Petty and Heartbreaker Mike Campbell.

Shannon's career -- his early Sixties hits were real rays of light in their period -- was more interesting than most might think. He was the first US artist to cover a Lennon-McCartney song (From Me To You included here which almost sounds written for his style); he missed out on having a hit with His Latest Flame (also here) when Elvis released his version; the exciting Keep Searchin' and catchy Handy Man in '64 showed he wasn't phased by the British Invasion and could hold his own.

He covered songs made famous by the Searchers (Needles and Pins), the Box Tops (The Letter), Boyce and Hart (She) and the Stones (Under My Thumb) but mostly wrote his own material (Runaway, Hats Off To Larry, Cry Myself to Sleep, the wonderful Little Town Flirt, Keep Searchin', the jangle-pop Why Don't You Tell Him and the dramatic (with phasing!) Big Hurt all came from his pen).

He also wanted to poach Ray Columbus' Invaders after a New Zealand tour with them.

His ambitious but ignored album Home and Away in '67 was recorded in London with Stones' manager Andrew Loog Oldham (three songs from that here as well as his slow and orchestrated Runaway '67), moved into production (young Bob Seger, Bryan Hyland) and later worked with Dave Edmunds of Rockpile . . . then Lynne and Petty.

He even took on What's a Matter Baby, a signature song for the great Timi Yuro.

The master of the two-minute-and-little-more pop song which has a catchy hook or distinctive delivery (he brought real hurt or fury to many of his songs, just check him on his co-write with Doc Pumus on Ginny in the Mirror), Del Shannon was a classy songwriter and a singer with a signature sound on songs of betrayal. His concise pop of I Go To Pieces in '65 was picked up by Peter and Gordon in a rare reversal of the British Invasion.

He reached back to doo-wop (Cry Myself to Sleep), looked across to the Four Seasons' style (Rag Doll) and did an album of Hank Williams songs as Beatlemania swept the US . . . but also understood and paralleled the increasing sonic complexity and songs of Brian Wilson as the Sixties rolled out (two songs from his largely ignored album The Further Adventures of Charles Westover, his real name).

Okay, not everything is great -- the Buddy Holly hiccup'n'yodel on The Swiss Maid a prime offender -- but his slide between gutteral tones and falsetto on songs like Runaway and its many offspring certainly set him apart.

Del Shannon songs were made for radio and these 52 -- a mere $20 from JB Hi-Fi stores here -- are perfect in a car because so many of them are about getting away, running away (Stranger in Town) or have some urgent forward momentum.