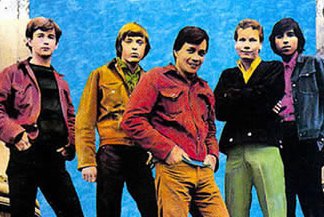 Whatever the reason -- working class industrial, mix of races, impurities in the water -- Detroit has been a hotbed of great music. From Bill Haley and Hank Ballard in the Fifties through Motown, Bob Seger and the Stooges to the Dirtbombs, Eminem and the White Stripes, it just keeps coming.

And let's not forget -- although many do -- the great Mitch Ryder and the Detroit Wheels who cracked a couple of classic singles in the early Sixties.

Ryder -- actually Billy Levise who initially styled himself Billy Lee -- played the black clubs with his band the Rivieras while still in high school then took on white suburban dance halls where his energetic performance kept alive the spirtit of his hero Little Richard even as the British Invasion arrived.

Spotted by producer Bob Crewe when they opened for the Dave Clark Five and blew them off the stage, they relocated to New York to record, Levise/Lee became Mitch Ryder and Crewe captured on disc their furious live performance.

But for my money this medley -- the failed Motown single Devil with a Blue Dress (by Shorty Long in '64) welded onto Little Richard's Good Golly Miss Molly, via the Jack and the Beanstalk phrase "fe fe fi fi fo fo fum" -- was their finest three minutes.

It went top five in the States -- but that was about it for Mitch Ryder and the Detroit Wheels in terms of chart success.

They had a couple of lesserly successful singles and Crewe steered Ryder into a slower soul style and he ended up in cabaret.

A pity, but this is a rock'n'roll classic of pure energy at a time when music was getting just a little bit arty.

Bruce Springsteen was a big fan of Mitch Ryder and used to incorporate this into his live shows, and for the No Nukes concert at Madison Square Garden in '72 he did a Detroit medley of both Ryder/Wheels classic singles.

This was old school rock'n'roll frenzy punched onto a small slice of black plastic. Perfection.