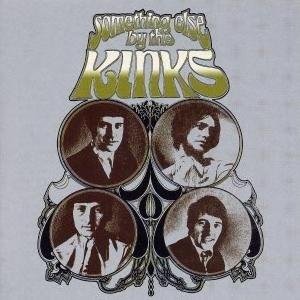 While most of the world was losing its head to psychedelia and day-glo, Kinks' songwriter Ray Davies burrowed even deeper and deeper into his domestic observations of English life on this album, in part self-produced and the rest by their longtime producer Shel Talmy.

Despite -- or perhaps because -- his classic single Waterloo Sunset which had come out previously, the Dylanesque hit Death of a Clown co-written with and sung by his brother Dave as well as the social comment on class in David Watts (also popular and later covered by the Jam), all of which were on the album, Something Else didn't do that well on release. In part that was also due to a budget price hits compilation appearing at the same time on their label Pye.

Subsequently however Something Else -- which has long been an Essential Elsewhere album -- has been hailed as a real turning point in the Kinks, and specificaly Davies', career.

It's predecessor Face to Face had hinted at what an astute writer and commentator he could be (A House in the Ciuntry, Most Exclusive Residence for Sale, Sunny Afternoon) which built on earlier songs like A Well Respected Man, the kitchen-sink feel of Dead End Street (which ran counter to the optimism of Swinging London) and the swipe at the Carnaby St slaves on Dedicated Follower of Fashion.

But now he drilled even deeper into domestic life with Two Sisters, Situation Vacant, Afternoon Tea and End of the Season.

More than just a bridge to the follow-uop Village Green Preservation Society -- as with the Beatles' Rubber Soul and Revolver as two parts of the same picture -- Something Else was one of the Kink's finest yet understated albums.

We mention it now because it is available in glorious mono (but no download code) at JB Hi-Fi stores here for just $25, one of a large number of such vinyl reissues which includes a few Nirvanas and three of Nick Cave and the Bad Seeds' best. More of them soon.

Take $50 to JB and you'll come home with a couple of records to expand that collection you are slowly building. Check out our previous Hi-Fi vinyl recommendations here.

You can also buy this album direct on-line from here.

There are an earlier Kinks' Bargain Buys here and here, and an article about Ray Davies songs covered by others here.

Ray Davies is one of my fav songwriters... Muswell Hillbillies is also an amazing album.