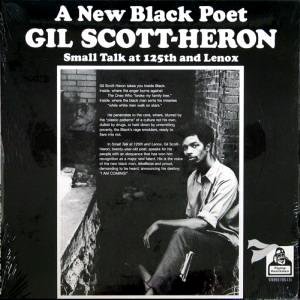 This debut by the late, early black revolutionary poetry is of great historical resonance because it contained the first recordings of his classics The Revolution Will Not Be Televised and the equally powerful Whitey on the Moon.

At the time – the live session recorded in 1970 for Bob Thiele's Flying Dutchman label and released the following year – Scott-Heron was 21, a published novelist and starting to set his poems to music. Inheriting the legacy of the Last Poets and writer Langston Hughes, Scott-Heron cited many musicians as his inspiration, among them Richie Havens, John Coltrane, Jose Feliciano, Jimmie Reed and Billie Holiday.

Revolution in the form of the Black Panthers was in the air so he also cited Huey Newton and Malcolm X as equally important . . . but he also (as did the Last Poets) took aim at his own people as much as white society.

In Brother he has a go at the blacker-than-thou revolutionaries on the street corners spouting rhetoric and fury without solutions or prepared to put themselves on the line, and on Comment #1 he speaks directly his own people who have adopted “revolution” in much the same way they once fell for the white view of American history.

At the same time though there is The Subject Was Faggots in which he ridicules gays in a way that is embarrassing and trying to explain it as not “being deliberately prejudice” as the contemporary liner notes try just doesn't hold up.

But anti-homosexual rhetoric then, and now in some rap, was also part of the black male self-perception.

Accompanied on most of these spoken word pieces by percussion players, Scott-Heron is a powerful voice . . . but also a great singer when he plays piano and sets his words to blues for three pieces where the influence of Nina Simone is also evident.

As a poet of the volatile era, Gil Scott-Heron was a rare, educated and articulate voice who laid out blunt and uncomfortably provocative truths.

An important reissue, which comes with the original cover and liner notes by Nat Hentoff.

Still makes you think. As does this from the same year.