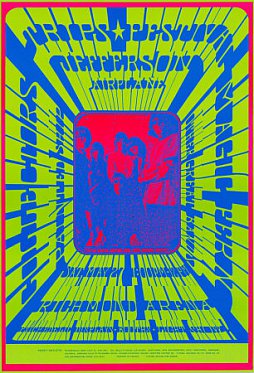 The New York garageband Blues Magoos' Psychedelic Lollipop of 1966 was one of the first albums to have the word “psychedelic” in the title, but it wasn't quite the spaced-out sweet thing the name suggested.

By the following year – 1967 with its famous Summer of Love – the drugs, Indian music and guitar solos had really started kicked in. The word “psychedelic” really started to mean something. Although different things to different people . . .

Moby Grape and Country Joe and the Fish out of San Francisco delivered debut albums which were sufficiently pop-rock to keep your attention, but also somewhat mind-bending.

And all of them, to a greater or lesser extent, wrote.

But by 1969 with the album Volunteers – just two years on from Somebody to Love and White Rabbit – they had abandoning the whole Summer of Love vibe for more direct militant rock (the Dead's Jerry Garcia among others parted company philosophically).

Two more years on and they were split internally: Dryden left in 1970, then Balin quit the band he had founded and critic Lester Bangs was writing of “the fire of the Kaukonen-Casady combination (on of the great lead/bass juxtapositions off all time, in the context of the Airplane) and the bambastic [sic] excesses of the Slick-Kantner axis, who, after all, wrote most of the songs and have increasingly stamped the group's identity with their own sensibilities”.

Yet despite diminishing musical returns the Airplane kept on: the first post-Balin album Bark wasn't up to much in the lyrics (an increasing failing, Pretty As You Feel boasted a great menacing tune but teeny-bop sentiments) and in '79 the Rolling Stone Record Guide wrote it off as “wretched”; and they split off into side projects. 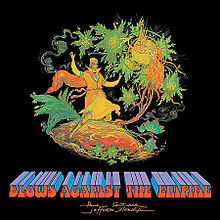 Blows Against the Empire in '70 was a concept album under Kantner's name (which included many Airplane members and fellow travelers including Slick, and Jerry Garcia) which he'd worked up while the Airplane were in-fighting. It was also the first time the name “Jefferson Starship” appeared (on the cover beneath Kantner's name) although the post-Airplane band of that name didn't arrive until four years later – but it was inauspicious unveiling of the name.

Perhaps it was the acid, perhaps the mood of the times – but a concept about people fleeing “Uncle Samuel” and oppression by stealing a spaceship and looking for a new home isn't the strongest of ideas, and hardly seems a blow against the evil empire of Amerikkka, more a flight from the frontline.

There are also some seriously addled/naive lyrics (a tree which grows babies?) and – aside from the experimental suite on the second side, the star trek, the music is hardly memorable.

Ed Ward writing in Rolling Stone was merciless: “If Paul Kantner really thinks that the pap he is serving up here is a blow against the empire, I suggest he takes a bowl of oatmeal and a spoon and start throwing oatmeal at some of the buildings he'd like to see topple and see how long it takes. What it is, is a blow against the sensibilities of anyone who has come to expect reasonably sophisticated music and lyrics (sophisticated for rock lyrics, anyway) from Paul Kantner and the Jefferson Airplane.”

It did however become the first rock album to be nominated for the Hugo (sci-fi writing) awards. 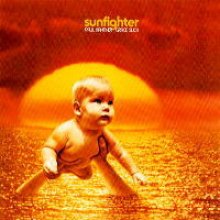 The following year Kantner and Slick – who by this time were a couple with a baby, China -- came out with Sunfighter (that's China on the cover) which divided Airplane loyalists: Some dismissed it as Kantner/Slick indulgence about parenting and some hippy-dippy concerns (although Diana was inspired by Diana Oughton, one of the revolutionary Weathermen killed when a homemade bomb she and others were building blew up their New York apartment); others heard beautiful songs on an album about personal and social renewal. ("An excellent set, able to withstand comparisons with any of early seminal Airplane work," said the '78 NME Encyclopedia of Rock.)

More interesting however was Baron Von Tollbooth and the Chrome Nun from '73 by Kantner, Slick and bassist/singer/keyboard player Dave Freiberg (from Quicksilver Messenger Service) who had joined the Airplane the previous year. The album also had the Dead's Garcia on guitar, mandolin and banjo, and guitarist Craig Chaquico. 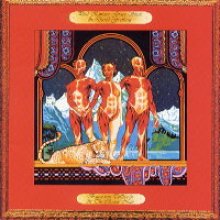 Tollbooth/Chrome Nun (the title referred to Crosby's nicknames for Kantner and Slick) was widely considered the best album by Airplane's crew since Crown of Creation in '68.

The shapeless solos had been trimmed and no “concept” to weigh it down; there were dreamy, trippy songs from Kantner (Mind has Left Your Body) and drama from Slick's powerful voice (the tough Across the Board, Fat with the Pointer Sisters on backing vocals); rousing political and social sentiments (Flowers of the Night); Garcia is terrific everywhere (especially on the country-flavoured Walkin') and it ends with the gorgeous, mysterious Sketches of China which could have been about the country or Kantner/Slick's daughter. There is also Slick's raunchy Across the Board (“seven inches of pleasure, seven inches going home”). 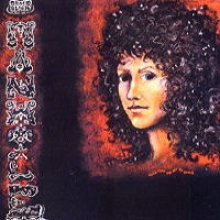 Manhole -- the title a typically smutty Slick snicker -- is odd but interesting.

It opens with a gently evocative Jay with wordless lyrics then there is the increasingly soaring, orchestrated, Spanish-inspired and quite exceptional 15 minute title track, the soundtrack for a film never made.

Toucan, Come Again is beautiful ballad (music by Freiberg, the mercurial guitar by Chaquico) and the closer is Epic #38 which is an orchestrated suite and comes with heart-stirring bagpipes.

And Better Lying Down was a straight-ahead blues with Pete Sears on barrelhouse piano.

It is one of the most overlooked Airplane-offshoot albums and Slick, unfortunately, wouldn't make another solo album under her own name until 1980.

And then, against the odds as there had been so many side projects – including Hot Tuna which was an on-going vehicle for Casady, Kaukonen and others – the Airplane resolved some differences and reformed in '74 . . . as Jefferson Starship.

Things began well enough with the debut album Dragon Fly then the chart-damaging Red Octopus – but thereafter the Jefferson Starship name was tainted by increasingly bland albums which eventually lead to Bernie Taupin-penned AOR stadium rock of We Built This City in '85, which, ironically was a line-up with no original Airplane/Starship members other than Slick (who had joined after the first Airplane album anyway).

It was a strange flight the Airplane/Starship had taken. From Balin being bashed by Hells Angels at Altamont to commercial corporate rock; from stoned psychedelic then rabble-rousing revolutionary rock to spaced-out sci-fi . . . and finally stadium pabulum.

How the mighty had fallen.

Want to read and hear more psychedelic music of the period? Then your trip starts here. The '93 Jefferson Airplane box set is essayed here. 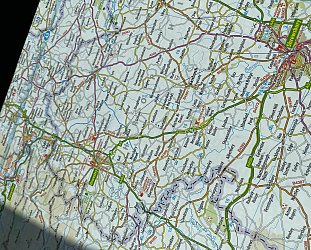 Because a couple of RATs were ambiguous, while in Brighton staying with my son and his partner, I did a lab test. Six hours later and NZ$190 lighter, Covid was confirmed. Although the notification... > Read more