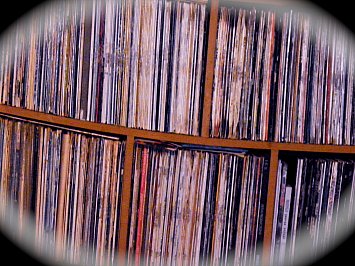 Elsewhere has been down a similar path with a series of 10 Shameful Record Covers I'm Proud to Own (see here, here, here and here). And there was also 10 Good Albums in Bad Covers . . . and two columns on 10 Odd Unplayed Albums in the Collection (here and here).

But here are 10 albums which it just seems embarrassing to have in the same house as those Essential Elsewhere Albums let alone all the others that bring hours of pleasure, although in truth there's no dividing line between those I said I was proud to own and these.

When I can remember how I acquired these offending albums I will mention them, but I'm reluctant to incriminate others.

Anyway, here goes with some dreadful stuff, some -- but admittedly not all -- in very bad covers. 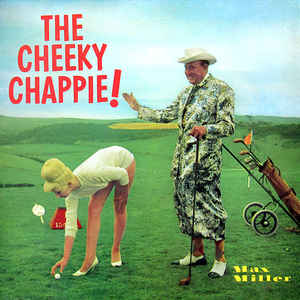 Miller was a music hall comedian who grew up the hard way, was in a concert party during World War One and returned to Britain to join various entertaining ensembles and struck out solo in the Twenties.

By the Thirties he was known as “The Cheeky Chappie” and was considered the finest, and most successful, stand-up comedian of the era.

He did risque jokes, sang sentimental songs, disliked swearing by comedians, wore loud suits, made jokes which today would sound misogynist, appeared in more than a dozen films and, although his career was up and down from the Fifties onward (he didn't translate to the new medium of television), he was still popular enough to record a number of albums in the Sixties, including this one recorded live at Star Sound Studios in London, eight months before his death.

Among his many catchphrases were these which appear on the album: "There'll never be another . . . when I'm dead and gone the game's over”. And in way it was. He died in '63 just as a new sound and generation were going to sweep the past away. There's a statue of him in Brighton and doubtless a few of his records in secondhand stores. I got this from the estate of the father of a friend.

My advice, save your money. 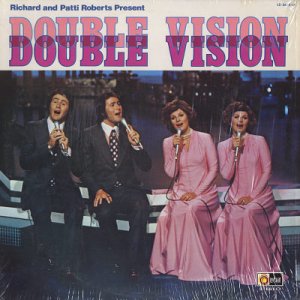 It's almost too easy to include albums by well intentioned Christians in any such list because there are just so many of them. But this one from the mid Seventies is just kinda weird. You'd be forgiven for thinking that it was by two sets of twins.

Of interest however is that Richard is the son of the famed televangelist Oral Roberts (d 2009) who tried his hand in the secular world of pop (to some small success) before dedicating himself to Jesus in '68, the same year he married – against the family's wishes – Patti. They divorced a decade later but in their time together recorded a number of albums, among them this odd looking affair.

The wonders of multi-tracking huh? And the complete vocal score was also available as a music book “for your choir”.

(Incidentally, Robert had a rather colourful career – it is outlined on Wikipedia – and he's a serial offender when it comes to producing books and records) 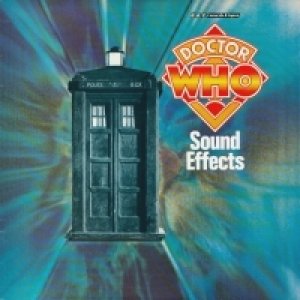 If you feel you really must have a sound effects record – and really, you mustn't feel that – then it should definitely be by the famous BBC Radiophonic Workshop and include their distinctive original them to Dr Who.

This is, but doesn't.

It is just two sides of electronic drones, bubble and squeak with titles like Zygon Spaceship Control Centre, Sutekh Time Tunnel, Kraal Disorientation Chamber and The Mandragora Helix. I inherited this from one of my sons who left it behind when he went overseas. It's rather drastic if you feel you have to leave the country to get away from the Zygon Spaceship Control Centre.

I got through this – it's Volume 19 from the workshop incidentally – by pretending it was Kraftwerk outtakes or abandoned Eno fragments. 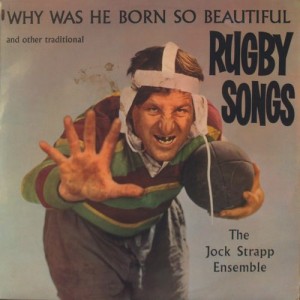 The Jock Strapp Ensemble: Why Was He Born So Beautiful

No red blooded Kiwi male should be embarrassed about having an album of rude, crude and lewd rugby songs . . . but it should at least be of local origin.

Mr Strapp and his ensemble – accompanied by barroom piano on such delights as Dinah Dinah Show Us Your Legs (“a yard above your knee”) – made a few of these albums.

If there's anything good to be said of this one it's that at least it isn't Volume 2. For that one a bunch of likely lads posed naked on the cover. 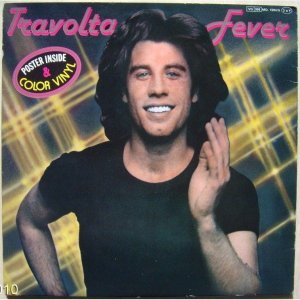 There's certainly no shame in having albums by Joey Travolta and Frankie Stallone or any other in the sibling-to-the-stars category.

But this double album vocal outing by actor, dancer, author, pilot and Scientologist – note we don't include “singer” there – was a shameful cash-in on his Saturday Night Fever fame and released in '78, the same year as Grease took off.

This album – despite those synergies and the positive thinking of Scientologists everywhere – didn't. Curiously neither the album cover – gatefold naturally – nor records have any songwriting credits although poor Jeff Barry – an excellent songwriter and producer – does have his name appended as producer on a few tracks. I doubt he would remember the sessions. Again, my son is to blame for me having this. Fortunately it is in such bad condition as to be unplayable. 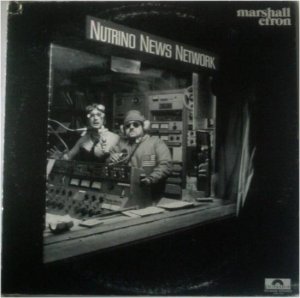 This poorly recorded album – some of the voices are off-mike – by US comedian Marshall Efron has a slight chilling ring at one point: the citizens of the imaginary Abysmo, New Jersey being told they need to carry their “freedom cards” at all times and must show it to anyone of authority “or you will have the shit beat out of you”.

There's also something about patriots taking care of law and order issues and there's also “the criminality of thoughts” which need investigation. That might be sooo 2018. But actually this is just heavy handed satire (which Polydor thought worthy of releasing in '72) by a man who had a reputation on radio in the crazy hippie days and who later voiced a number of animated characters in films.

But this humour is a long way from the surreal cleverness of Ken Nordine and the pointed social observations of National Lampoon, and frankly there are few if any laughs to be had in the 40 minutes, unless you were, like, rilly stoned maaan, at the time. The try-hard cover might have already alerted you to that. 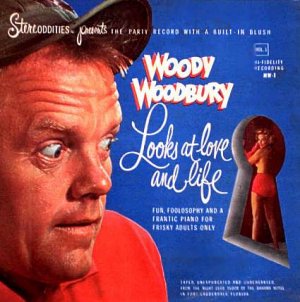 And looks at women through a keyhole? Subtitled “fun, foolosophy and frantic piano for frisky adults only” this '59 debut album by an American stand-up recorded live at a nightclub in Fort Lauderdale. Lotta jokes about booze and dames and mistresses and such. Adult humour of the period on “the party record with a built in blush” according to the cover.

He plays the piano and in the liner notes he is quoted as saying “Once in a decade a truly great comedian comes along . . . meanwhile I recommend me”.

At the time of this writing Woody – who appeared in a number of films, notably For Those Who Think Young in '64 with James Darren and Tina Louise who went on to become Ginger in Gilligan's – is apparently still alive and in his early 90s. There's a decent tribute to his career here. 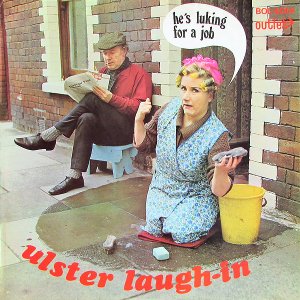 The '71 debut album by Belfast singer, actress and comedienne which the liner notes describe as “her own special brand of Ulster humour”. There's no doubt she was hugely popular in her time and place (she was awarded an MBE) and when she died in 2014 at age 90 there were numerous tributes.

Once you get on the wavelength of the accent and her pinched delivery there is period amusement to be had, and the Protestant/Catholic politics can raise a wry smile or two.

Actually just the two by my count. Another from the deceased estate. It's rather drastic if . . . 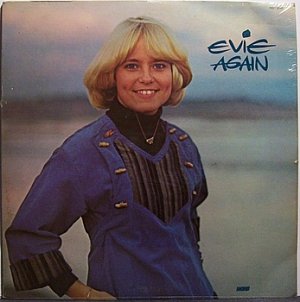 Again? Because you didn't get enough of US-Scandinavian Christian singer Evie Karlsson the first time? As with so many Christian singers she was unstoppable in the studio – this was her fifth album from '75 and I understand that at 60 she's still going despite a brief retirement – and she was one of the inaugural inductees into the Christian Music Hall of Fame.

Born in the US, came to attention in Norway, recorded this in Sweden, multiple Grammy nominations . . . I'm surprised you haven't heard of her. Just as surprised as I was when this took up residency in my collection. It's not in good condition which is my excuse for not playing those ever-popular songs Clean Before My Lord, That Day is Coming Closer and Jesus Loves Me/Oh How He Loves You and Me.

As mentioned, you could fill pages with Christian albums but given her high profile (“although not a household name in the music world” as the liner notes concede) this deserves inclusion because it's kind of embarrassing to have. More so to play, perhaps? 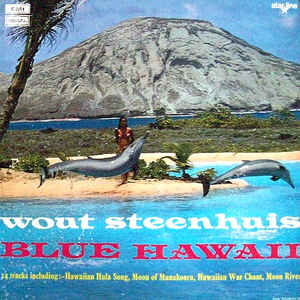 There's nothing wrong with having a collection of Hawaiian music, but -- although Elsewhere has enjoyed these vagaries in the past, see here and here -- it's a little embarrassing when the musicians are about as far removed from the islands as they can be.

Steenhuis was one of those: he was Dutch and fell for Hawaiian music in a big way and went on to record quite a number of albums in the genre, and they came with the obligatory "island-fied" images on the cover. He was actually very good (he died in '85) and this album from '64 was pretty typical. It opens with Pidgin English Hula, moves through Hawaiian standards and Bali Ha'i (from South Pacific) and on into Moon River, Blue Hawaii and Green Leaves of Summer.

Nice. But why, when I could have more authentic Hawaiian artists?