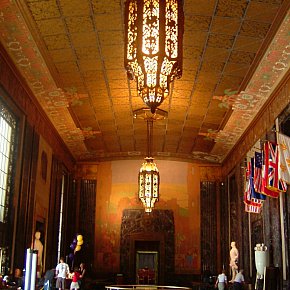 The bullet holes from the shoot-out are still there. It's a narrow corridor so you can imagine what the gunplay must have been like: shots echoing around, one man falling from his wounds and the other shot dead, the shouting and clack of heels resonating off the marble floor . . . Today of course all is quiet, just a few people getting in and out of the hissing lifts or going about their... > Read more 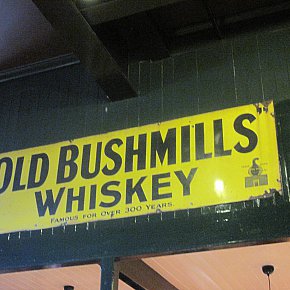 This is how every working week should start: it’s 10am on a Monday and already the aroma of fine Irish whiskey — people around here would say “the finest” — is filling our lungs. Outside the North Atlantic crashes on ragged rocks and the wind whips over green fields, but here inside Bushmills Distillery on the northern coast of Northern Ireland the air is warm,... > Read more 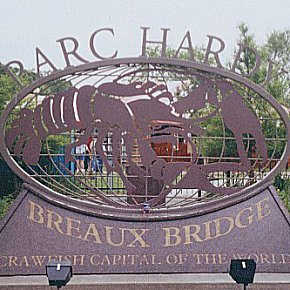 Norbert shuts off the small outboard and pulls the propeller out of the brackish water. He loosens the weeds which have fouled it and tosses them away. We sit in the silent stillness of Lake Martin beneath cypress trees and Tupelo gums, some of which are 300 years old. They have their roots in soil more than a metre below the still surface. A crane flies low over the trees. "Now,... > Read more 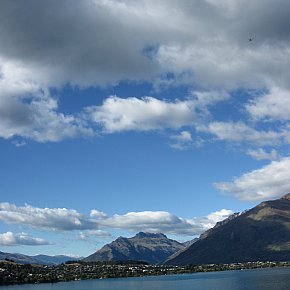 Nine months ago my life wasn't like this. Everything was different. Then, the hard white sun would melt the early morning cool and the air would thicken with the smell of decaying jungle vegetation. On the cracked pavement of the town's only main street women would squat in doorways avoiding the equatorial heat as they sold their meagre produce. Men walked aimlessly in the alleys,... > Read more 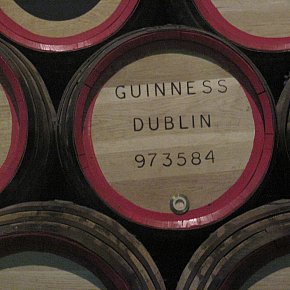 The black and white image of the man on the small television screen looks like something from a remote world of more than a century ago: wearing a white shirt, braces to hold up wide flannel pants and heavy work boots, he shaves timber slats into shape, arranges them carefully and then hammers an iron hoop around them. Against the backdrop of a factory where steam wheezes from huge... > Read more 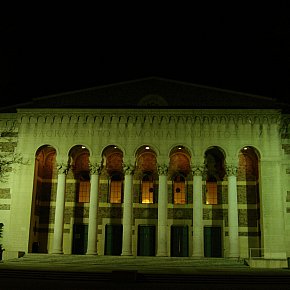 In the few hours after dawn there is nothing here but ghosts. As sharp California light spreads across the empty streets of Old Sacramento the homeless who sleep under the nearby flyovers emerge, shaking their milkshake containers as they look for handouts. But there is no one around yet to bum coins off, just other ghosts pushing supermarket trolleys of their belongings and rummaging through... > Read more

The American poet William Carlos Williams had an astute and true observation about travel: “I have discovered that most of the beauties of travel are due to the strange hours we keep to see them.” There was certainly some bleary-eyed beauty at Parramatta Park west of Sydney as night wheeled towards a red dawn to the sound of cockatoos and rosellas. And on the way here... > Read more 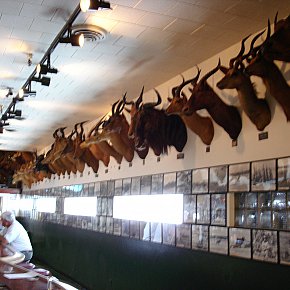 Bill Foster never saw an animal he didn't like. And like so much that he'd shoot it, have it's head chopped off and stuffed, and brought back to his bar in smalltown Rio Vista, halfway between San Francisco and Sacramento. While most hit Interstate 80 and speed between SanFran's Bay Bridge to California's capital in a couple of hours, there is a more rewarding day-long drive down the older... > Read more 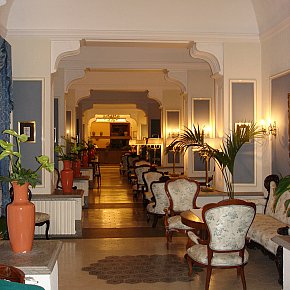 Over cocktails Lionello -- who owns a luxury hotel in Sorrento -- insists we go to his friend Gennaro’s restaurant. “He is a master, he has a gift,” he says enthusiastically, advising us away from his own dining room which had, the previous night, offered food that redefined the word sublime. “But is he fat?” I joke. “I don’t trust a thin... > Read more 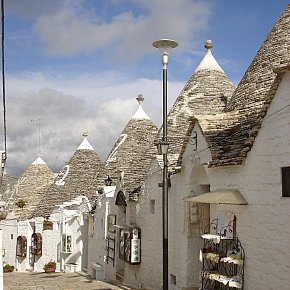 The undistinguished slice of autostrada is almost deserted. Just us, and a gun-metal grey Mercedes -- a minute ago but a dot in the rear-view mirror -- disappearing into the distance ahead. We're in no such hurry so pull off to the Adriatic Coast which has been somewhere to our right this past hour as we have driven up this east coast of southern Italy  The dismal motels and... > Read more 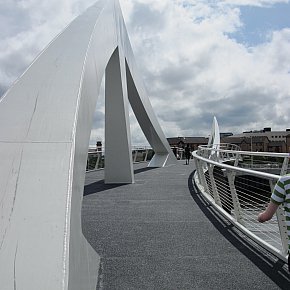 Locals call it “the Armadillo” but it's a rather obvious name for the striking building by the River Clyde, once the heart of Glasgow shipbuilding. With a suspicious similarity to a more squat Sydney Opera House, the Armadillo huddles almost fearfully in the shadow the enormous, now redundant, Finnieston Crane, a muscular reminder of the city's industrial past. Designed by... > Read more 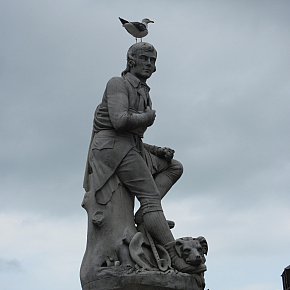 One of the most cherished books in our house when I was a boy was a collection by Robert Burns, or “Rabbie Burrrns” as my mother said. The book was little bigger than a matchbox, its cloth cover an increasingly threadbare tartan, and the edges of the pages were painted gold. It was as much a treasure to look at as for the ringing songs and poems within. Peculiarly... > Read more

Eddie Reader: Ye Jacobites (from the album The Songs of Robert Burns) 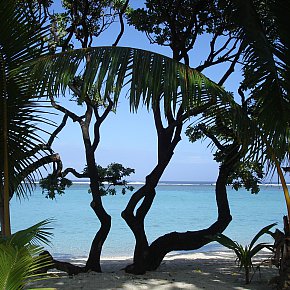 Three hours drive south of Bangkok -- on a typically terrifying journey of close encounters and near-misses along the highway -- is the town of Hua Hin, little more than a shop-lined wide spot in the road for some tourists, and ignored completely by most others. But while the islands of south-east Thailand are becoming a clutter of beach bungalows and young players from Europe looking for a... > Read more 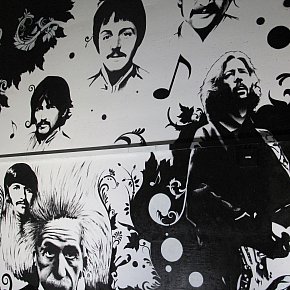 With due respect to Dr Johnson who said, “When a man is tired of London he is tired of life“, he was speaking before the chaos of modern life: Tube delays; pubs with pokie machines and football on the flat screen; young bankers with few lagers in them who think they are East End ‘ard men . . . It’s possible to be very tired of London. That said, no journey... > Read more

"The English invent the most stupid of sports," says John. He should know, he's English and we've been talking about cricket. We're sitting at the poolside bar in the sumptuous Anantara Resort and Spa near the coastal town of Hua Hin, three hours south of Bangkok. The reason for his outburst is the game we have spent this September day watching: elephant polo. At the Somdej... > Read more 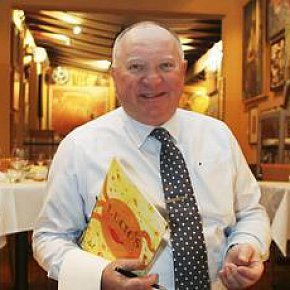 Lucio pauses mid-stride as he passes my table and then – perhaps because he can recognise the colour and bouquet, or maybe he cheated and peaked at my order – says enthusiastically, “Ah, but you are drinking a wine from my region, Liguria”. He claps his hands gently then stares at me for a moment. What happens next is beyond cheating and peaking: “But... > Read more 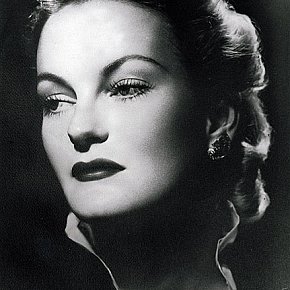 At the end of her sometimes scandalous life, the American heiress and socialite Doris Duke was unlikely to go into that great goodnight without some attendant controversy -- and she didn’t disappoint. When she died in at age 80 in 1993 at one of her homes -- the so-called “Falcon’s Lair” in Beverly Hills which had belonged to Rudolph Valentino -- she left her billion... > Read more 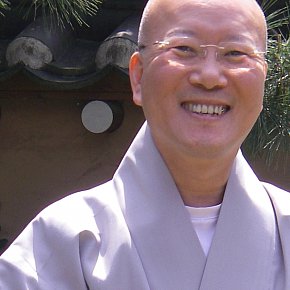 Soo Bool Sunim smiles broadly and asks, “Can you see your own eyes?” This is not a question that has ever occurred to me, but now it becomes troubling as I turn it around in my head, looking for an angle into it, and wondering whether there is an answer at all. Or even if that is really the question. This bewilderment is what Zen masters can do to decades of logic the... > Read more 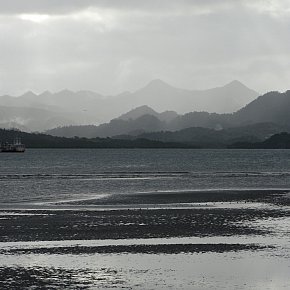 Give them credit, they were persistent. When the Reverend Thomas Baker, a Methodist minister, unintentionally insulted a chief on the Fijian island of Viti Levu in 1867, he and six of his Fijian followers were hacked to death and eaten. Baker has the dubious honour of being the only European Methodist to be dispatched in such a way. And the people didn't stop with him. The... > Read more 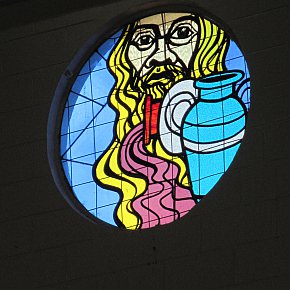 Samoa is hardly short of a church. To the casual eye it seems as if each village has its own Catholic, Mormon, Methodist, Assembly of God and whatever else building, many of them are quite breathtaking. And new ones are being built all the time. But high above Apia in Vaoala is the Shrine of the Three Hearts, an enormous, airy and very beautiful Catholic church with a commanding view... > Read more