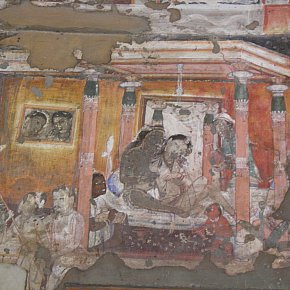 It's strange but true: Some of the most important discoveries of historic sites have been remarkably recent, and have often come about by accident. It's hard to believe, for example, that it wasn't until 50 years ago when a couple of road workers near Laura in northern Queensland decided to climb a hill for a bit of a look-around . . . and discovered Aboriginal rock painting dating... > Read more 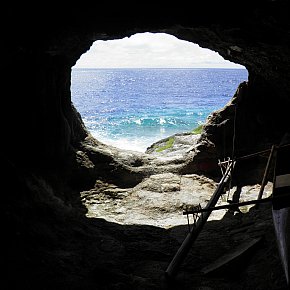 Niue, South Pacific: A whole lot of lovely nothing

There is a truism about travel: Get up early rather than stay out late. That way you see the people, village or city starting to go about its daily life. In the early morning – rather better than through 2am beer-goggles – you can more closely connect with the world you have dropped in t. The fact is though, there's not a lot that would keep you out late on the wonderfully... > Read more 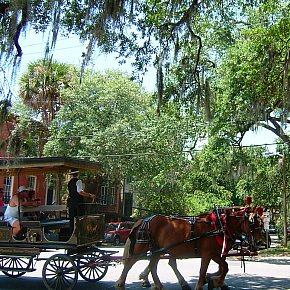 Mary's words float, wisps of cloud in this hot Georgia afternoon. She speaks in a charming, slow drawl, her voice rarely rising with inflection. We walk through Columbia Square in the old heart of Savannah where Spanish moss hangs like whispers from dogwood trees. "Now, we had a gennel-man down he-ya one tahm recently," she says, her words dragging like slow woodsmoke in the... > Read more 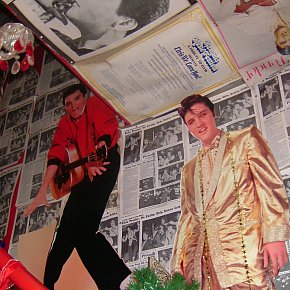 Holly Springs in north Mississippi has some interesting historic attractions. Probably. I wouldn't know. I didn't bother looking for them. Holly Springs is a bit out of the way even if you happen to be in the state, but this picturesque town -- which apparently changed hands 62 times during the Civil War -- is a useful midpoint on the Elvis Trail between his birthplace in Tupelo... > Read more

I Was the One 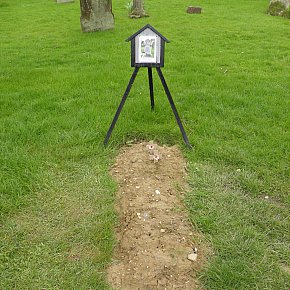 While in Winchelsea in south east England, I went to pay my respects to Spike Milligan at his grave in St Thomas' churchyard. Unfortunately, Spike was out. More correctly, his famously funny headstone had been taken away – they left Spike down there – because, when his third wife Shelagh Sinclair was buried beside him June 2011, her family wanted her name and dates added to... > Read more 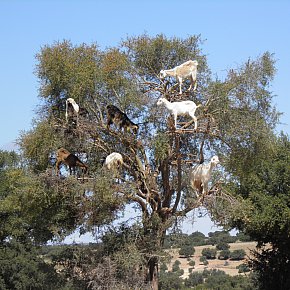 So you will be seeing the goats in the trees, said the man in the marketplace. I laughed because I'd clearly misheard. I thought he'd said, “goats in the trees”. The other man patting a pile of bright yellow spice back into an attractive pyramid stopped and turned to me, “Oh yes, there will be goats up in the trees. You will see them, I guarantee.”“You... > Read more 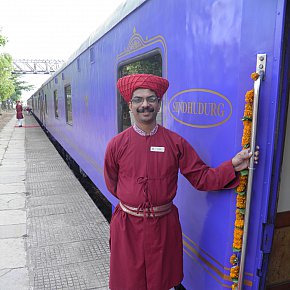 In the historic, temple-filled and rather wealthy Indian city of Kolhapur a couple of hours north of Goa there's a glimpse of a past which is appealingly distant but also curiously contemporary. The day I arrive at the New Palace – an imposing 150-year old building in the Indo-Gothic style commanding spacious grounds – it is the day of the famously crazy and colourful Holi... > Read more 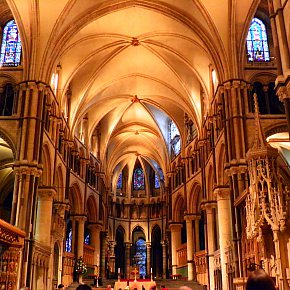 So the murder was good for business then, Mike?“It was the biggest cash cow the cathedral had known,” laughs Mike Evans, one of the guides at Canterbury Cathedral, the spiritual home of the Anglican Church and where Thomas Becket was murdered in 1170. Evans, who retired from a sales career in London and returned to his childhood home of Canterbury some years ago, mixes... > Read more 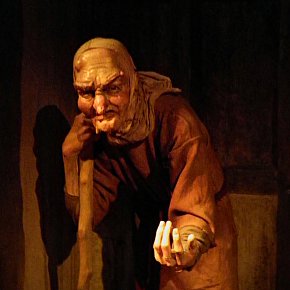 Although the famous cathedral is rightly considered the physical and emotional centre of Canterbury in England, the historic old town holds other delights and diversions, especially if you are there with children who might not see the point of dead people made of stone and really big stained glass windows. And, after a few hours of peering at strange inscriptions about people we never... > Read more 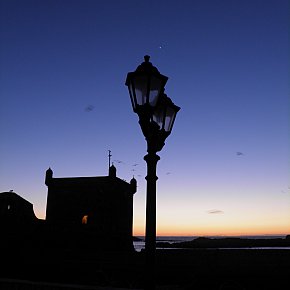 He was offering cakes, small dry round things which looked pretty unappetizing, but that wasn't what he was really selling. After the tray had been presented and I'd waved it away, with a flash of his hand he opened his palm and whispered urgently, “You want?” There, in a tight dark ball, was a lump of hashish. In earlier times we might have done the deal, but these days .... > Read more 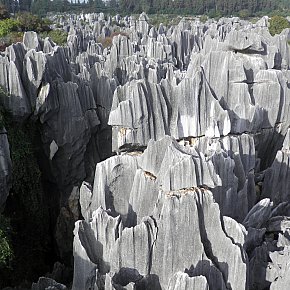 At one point Lily, our guide from the Yi people -- a prominent ethnic group in this area of southwest China – stops as we visitors negotiate our way through the surreal formations of the famous Stone Forest near the city of Kunming. As the four of us stand beneath sky-pointing fingers of blue-grey rock, Lily says this area is the traditional home of her Yi people (pronounced... > Read more 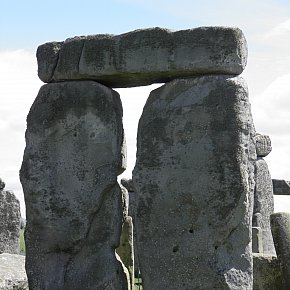 A couple of years ago when Britain's English Heritage was again getting fretful over the increasing number of tourists arriving at Stonehenge on Salisbury Plain, a wag wrote a pithy one-liner to a major daily. If whoever erected those monolithic stones was so smart, he asked, why did they build it near a motorway? Certainly if you wander around the site in Wiltshire of this... > Read more 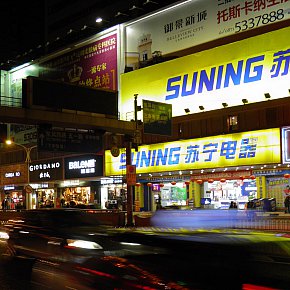 Kunming – the capital of Yunnan province in south west China – doesn't do quiet. With a population around 6.5 million (and, improbably, a sister city to New Plymouth since 2003), Kunming delivers confusion, haste, noise and its own peculiar order in the apparent chaos of motorcycles and scooters which flit between buses, tracks, cars and pedestrians. Crowded buses wheeze... > Read more 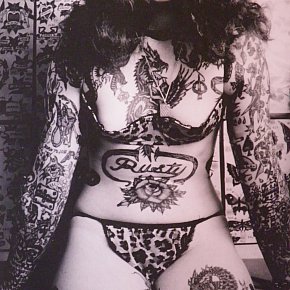 Three days before he was sentenced on firearms charges, I was looking Tame Iti directly in the eye, his stare unblinking. The room was all but empty, just my wife and me, and his was the first face I'd seen when we walked in. Oddly enough, his familiar, assured but also rather gentle gaze seemed welcoming, given we were in the Amsterdam Tattoo Museum on the other side of the world... > Read more 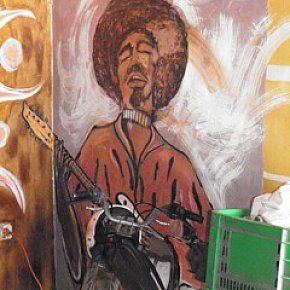 A few kilometres south of the busy and breezy port town of Essaouira on Morocco's Atlantic coast is the dusty village of Diabat, famous for one thing. In mid 1969, Jimi Hendrix didn't go there. Not that the owner of the local cafe would admit to that. Quite the opposite in fact. The cafe – which played an endless loop tape of Bob Marley while we had coffee and cake on a warm... > Read more

Castles Made of Sand 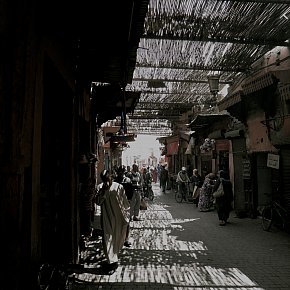 As anyone who has had the good fortune to go will tell you, Marrakech is a city of noise, especially in the grand central square. Here by day snake charmers and fortune tellers call for attention, motor scooters blat past, cars on the unmarked road around the perimeter sound their horns, fruit and vegetable sellers shout invitations at you to sample from their attractive displays, Berber... > Read more 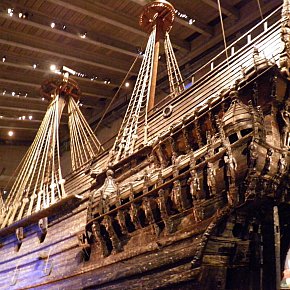 Compared to the maiden voyage of the Vasa, the ill-fated Titanic enjoyed a pretty good first outing a century ago. At least it got in four days of plain sailing before hitting the iceberg. The ornately decorated warship Vasa set out from Stockholm and was little more than 1200 metres into the harbour when it was caught by a gust or two, rolled onto its side, took water through the... > Read more 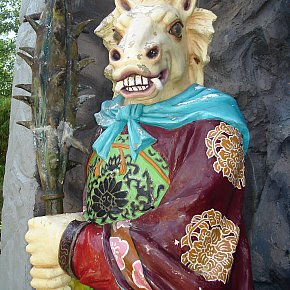 As travellers or tourists we often go a long way to see the beautiful, the breathtaking and sometimes the just plain bizarre. No trip to Tucumcari in New Mexico is perhaps complete without a peek at the museum with its collection of barbed wire, or in Rome a quiet wander around the crypt of Chiesa di Santa Maria della Concezione where the altars, candleholders and wall sculpture are... > Read more 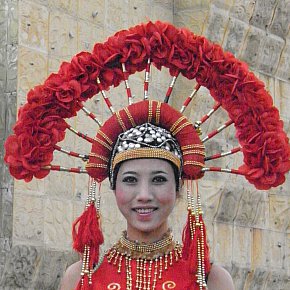 Sometimes, if you don't have a friend in an unfamiliar city to get you off the tourist trail, it helps to have a project which may lead to unexpected places. So in Kunming, the capital of Yunnan province in south west China, I decided to buy a pipa, a traditional lute-like instrument played by women, coincidentally the most notable being Kunming's own Liu Fang who now lives in Canada.... > Read more 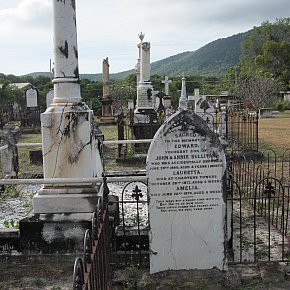 It's a curious thing, but the quiet of a cemetery can tell us as much about a town as the living residents gabbing over drinks in a late night bar. There on moss-covered and often damaged headstones are the spare, telling details of lives which can speak to us of long-gone days. Even more than a chat over over schooner in a local pokie bar, at pleasant, orderly and somewhat sleepy... > Read more