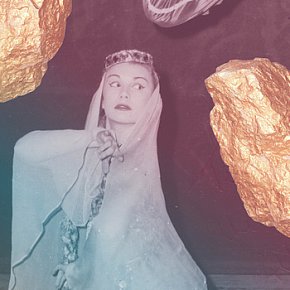 Cassette tapes don't turn up in my letterbox that often these days. In fact not for at least a decade, maybe even much longer. They tell me there's a cult audience out there who like the idea of cassettes, but there's a cult audience for most things and tapes are damnably problematic because you can never find a track again, and they break. Remember the Seventies when the side of... > Read more

sample of music by Margaret (extract only) 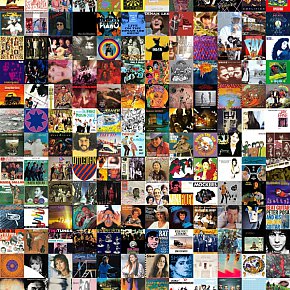 This week I was invited to a function in Auckland hosted by recordedmusic.co.nz. The event -- at which Shona Laing and John Hanlon performed -- was entitled Tied to the Tracks, named after a rarely-heard Laing album which she had recorded in London at the dawn of her career. But in good news, this album is no longer rare or unavailable. Because the event -- in Tyler Street Garage, a bar and... > Read more 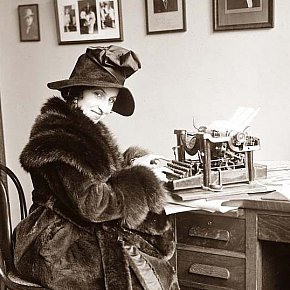 Some months ago I was invited to judge the Reviewer of the Year category for the Canon Media Awards. The awards ceremony was last night and I have been asked to post here the comments I wrote for the judging panel. I make some points about the reviewing process which may be of interest to general readers. It is common for judges of any award to note how difficult the decision was. Just... > Read more 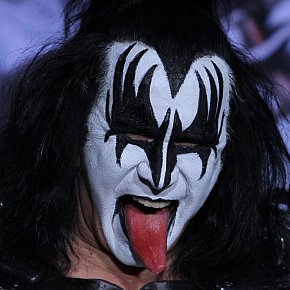 Trust Gene Simmons of Kiss to inject some controversy into the band's induction into the Rock and Roll Hall of Fame today (April 10, US time). While so many others are happy to take the accolade, do the handshakes and attend the slap-up dinner, Simmons was blunt and got the headline. He recently told a US radio jock that hip-hop doesn't belong in the Hall of Fame, and nor do disco... > Read more 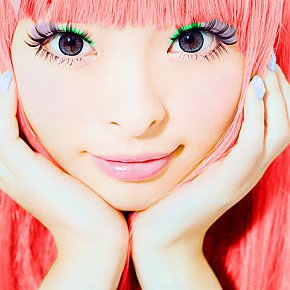 Like French pop, the mainstream pop music of Japan is largely a mystery to outsiders. If so much French pop is breathy or more like an innocous soundtrack to high-end visuals, Japanese pop can seem like cliches come to life. And J-pop works in an enclosed world. Japan and Korea were the only countries last year to have their end-of-year top 10 album sales made up entirely of local artists.... > Read more 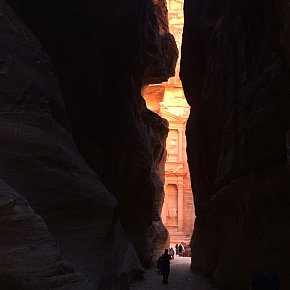 Hamad suddenly pulls us aside in the canyon between towering rock faces and says, “See” as he points to a gap in the path ahead. “This is 'Wow', right? Indiana Jones, yes?” Well yes, it is wow and Indiana Jones because through the corridor of sheer stone we can see that breathtaking building carved from solid rock which appeared near the end of Indiana... > Read more 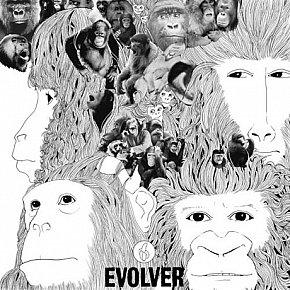 There are any number of books dedicated to the art of the album cover, and at Elsewhere we've indulged ourselves in articles about 10 Shameful Record Covers I'm Proud to Own (four columns, see here) as well as an article on 10 Good Albums in Bad Covers. You could fill a handsome coffeetable book with parodies of Beatles covers alone (hmmm, that's an idea), especially Please Please Me, With... > Read more A decade ago I was interviewed by Trevor Reekie of National Radio as part of his series about music writing and critics. I recently found the CD of it which he gave me -- the 30 minute un-editied version was very loose and funny and the anecdotes were obviously embellished -- but this edited seven minute version covers a fair bit of ground. The Mick Jagger story I mentioned is... > Read more 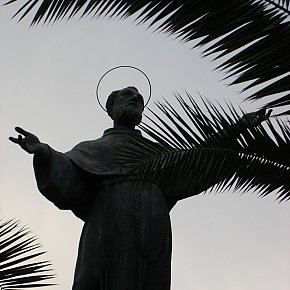 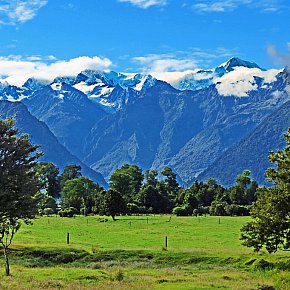 Some many decades ago, after my dad and I had returned from an extended overseas trip, we were having dinner with some friends of my parents. At some point one of the guests – perhaps annoyed we had been banging on about some interesting places we'd been – spoke up for the beauties of Auckland and said, “In what other city in the world can you be swimming in the... > Read more 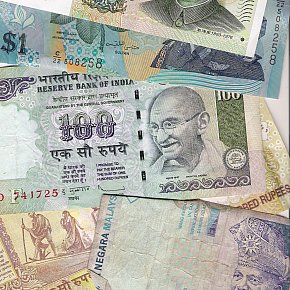 In a Mumbai bar a guy from Amsterdam tells me (from New Zealand), about an American television programme. Despite the cultural collisions of that, he's got a good story. Apparently the host – Jimmy Kimmel or maybe Conan O'Brien, he couldn't remember – went into the street and asked passers-by whose face was on the dollar bill. Rather than admit they didn't know – it's... > Read more 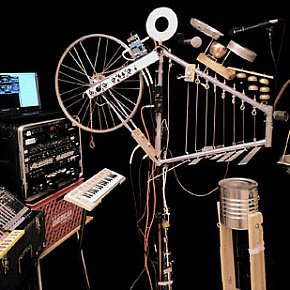 point that thing the other way 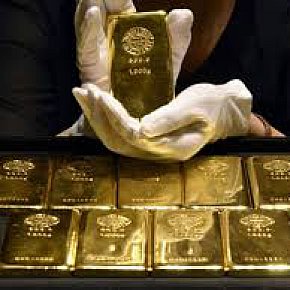 Well known artists can deliver great songs, but they don't often find an audience. This 15 minute audio programme introduces some that unfortunately went right past most people. For more of these fast 15 minute programmes go here > Read more

hey, stop and listen to this! 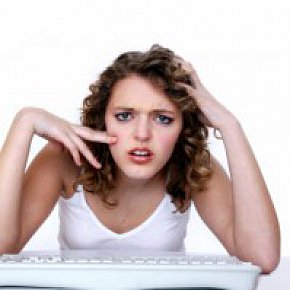 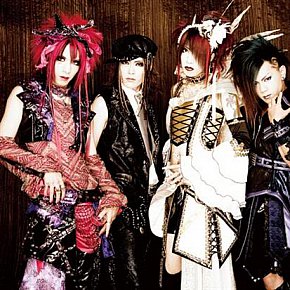 oh, i know this one! 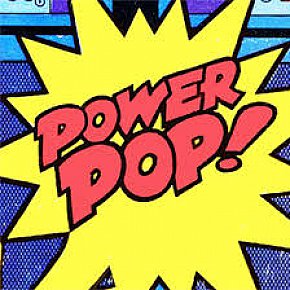 And here a pathway through power pop for when you have 15 minutes to spare. From the Searchers and the Ramones through an alphabet of Beatles, Badfinger, Big Star . . . Enjoy. And you can read more about power pop at Elsewhere starting here.  For more of these fast 15 minute programmes go here > Read more

pop turned up to eleven 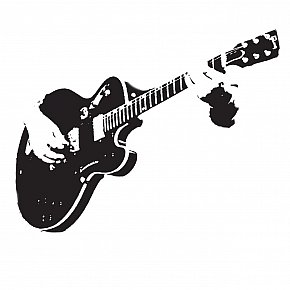 Here's something new for you at Elsewhere when you have 15 minutes to spare. Have a listen to this, a short programme about how songs can be started with a hook, a riff, nagging repetition and so on. Enjoy . . . and see how many songs or titles you can recognise. > Read more

getting a song going 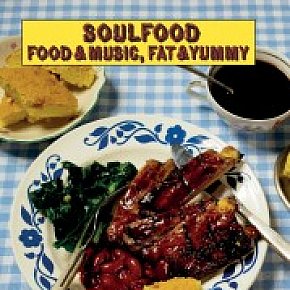 To be honest, for many decades I thought succotash was some kind of cuss word. That was probably because I'd seen the perpetually angry Loony Tunes character Yosemite Sam bellow out "sufferin' succotash" one time -- and that fitted right in alongside his other, largely unintelligble, quasi-profanities. These days I know that succotash is a cheap and easy beans, tomatoes and... > Read more 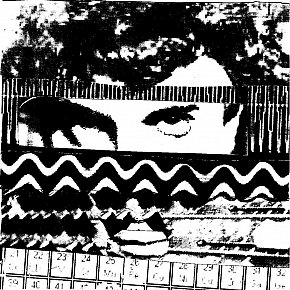 When composer Douglas Lilburn left New Zealand at the dawn of the Sixties, it was because he felt he had been isolated from developments in contemporary music, and he was curious about electronic music.* He was almost 50 when he left in '63 to travel to Hawaii, New York, Paris and England where he visited electronic studios, such as the BBC Radiophonic Studio in London, famous for producing... > Read more 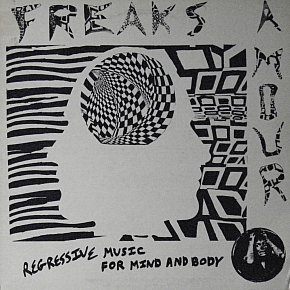 The occasional installments in this series of shameful record covers which I have in my possession always comes with this caveat: if you're curious about any you shouldn't pay more than $6 for them. I didn't, and that's the point. If you buy an album for its cover art -- odd, frightening, kitsch or whatever -- then you do need to keep some perspective. Given you probably won't know the... > Read more

She Went So Lonely