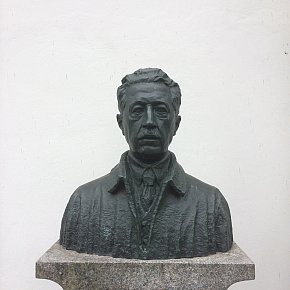 Although most people discreetly draw a veil around the private life of Prince Eugen of Sweden, you can't help note the homoerotic quality of the male nudes in his art collection. Or the absence of women in his inner circle of friends. Prince Eugen – born into a liberal royal family in 1865 as Eugen Napoleon Nicolaus Jansson, fourth in line to the throne... > Read more 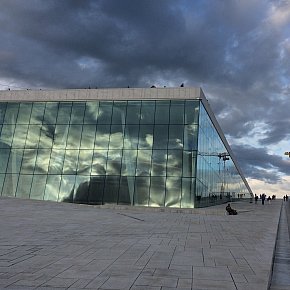 In the first two parts of this brief series about the architecture of Oslo, we looked at the new developments in the Barcode area and around the Renzo Piano-designed Astrup-Fearnley Museum of Modern Art. The centrepiece of Oslo's archirtectural regeneration and development however is the undeniably beautiful and strikingly innovative home to the Norwegian Opera and Ballet, a landmark... > Read more 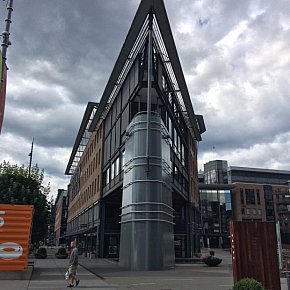 In the first part of this photo essay-cum-envy tourism look at the new architecture of Oslo, we turned the camera onto the small and developing area known as Barcode which is emerging behind the city's magnificent opera and ballet hall on the water's edge. More on that building in Part Three, but here we look to the small peninsula beyond AkerBrygge just a few minutes walk from City... > Read more 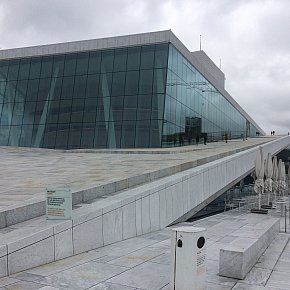 Although the jewel in Oslo's architecture is the breathtaking Norwegian National Opera and Ballet building -- pictured here, like a glacier on which people can walk on and through -- there are many spectacular examples of 21st century design everywhere. Not the least of course is the Renzo Piano-designed Astrup Fearnley Museum of Modern Art with its huge curved roof and passageway between... > Read more 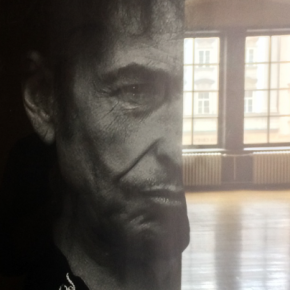 Although most people, including many longtime followers of his music, only know of Bob Dylan's paintings because of his Self Portrait and The Band's Music from Big Pink album covers many decades ago, he has long pursued a creative outlet through the visual arts. He makes large scale sculptures and has presented a number of themed painting and graphic exhibitions in recent years, notably the... > Read more Within weeks of the release of Beatles' album Sgt Pepper's Lonely Hearts Club Band 50 years ago, its front cover image -- photographed and constructed by Peter Blake and Jann Haworth -- was being copied, parodied and appropriated. Numerous bands and companies down the decades have used the idea, and Frank Zappa was quick to grab onto it for the Mothers of Invention album We're Only In It... > Read more It was my pleasure to take part in this panel discussion -- hosted by Duncan Greive -- about the importance and impact of Bob Marley in New Zealand popular music and culture. This was the inaugural panel discussion/podcast which launched the Spinoff's Pod on the Couch series of discussions and debates. The discussion was prompted by the release of Stir It Up; Aotearoa's Tribute to Bob... > Read more 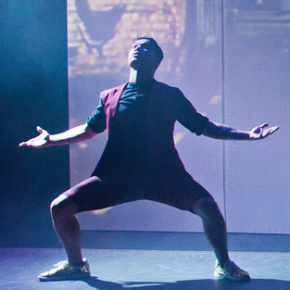 Although not without its problems – uneven pacing and a curious lack of necessary theatrical conflict between some key characters – this energetic production gets by on youthful vigour, terrific songs, exceptionally athletic dance and flashes of wit which neatly undercut the serious surface. Writer/director Kouka of Wellington's Tawata Productions says the genesis of the... > Read more 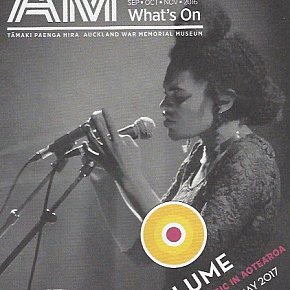 This is the article I wrote for Metro magazine about the Volume exhibition which is currently running at the Auckland War Memorial Museum. People say it a lot: As you get older you can't remember last week, but your childhood comes rolling in with great clarity. As someone in peril of being described as “elderly” by a fresh young journalist, I can tell you in my case this... > Read more 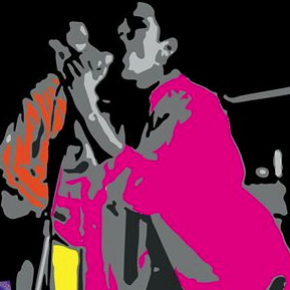 Those of us who were there -- and Elsewhere freely admits to only having been there four times -- will attest that Zwines club in Auckland was where the NZ punk live scene first happened. By chance or coincidence Zwines was in the same old brick heritage building which housed the rebellious Beat-era pop-rock bands of the Sixties such as Larry's Rebels. The building which is now a... > Read more

I Am a Rabbit, by Proud Scum Tragically, it seems, the appalling lessons humanity should have learned from the Nazi era have been forgotten – or worse, not even known – by far too many people today. While most haven't quite got the Hogan's Heroes rear-view of that time (Gosh, what merry japes they got up to and fooled those silly SS and Nazi types?), it does seem odd that George Clooney and the rest... > Read more Although it is his autobiography and he's allowed to exclude whomever and whatever he wants, it did seem odd that Philip Glass would not have mentioned John Adams' opera Nixon in China in his recent book Words Without Music. Both Glass and Adams – along with Steve Reich – redefined the parameters of opera in the late 20th century with their enormous multi-media works. And... > Read more 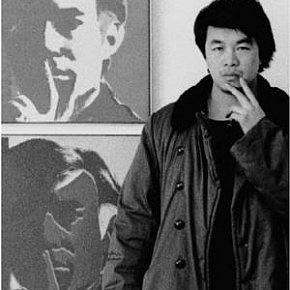 Curiously enough, although both men were artists living in the same city not far from each other, had friends in common and sometimes attended the same exhibitions, they never met. They were however separated by age (the older man in his mid 50s, the younger man three decades his junior) and cultural background (American and Chinese). But now Andy Warhol and Ai Weiwei, or their... > Read more Because of their temporary nature and purpose, band and music posters are often an ignored art form. Not all such posters are artistic however, most are just fit-for-purpose: name, date, venue and hopefully some eye-catching image or typography. After the event they are advertising, most are simply redundant except for the fact that . . . When looked at from some distance many... > Read more 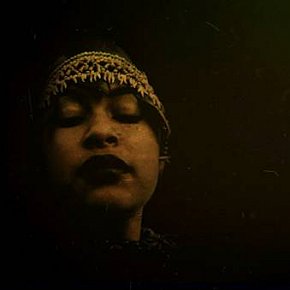 EXPLORING OUR INNER MYTHS AND LEGENDS (2015): The stories we carry inside

“We are all connected in some way,” says Solomon Islands-born artist and curator Reina Sutton. “There are myths and legends from all corners of the world. One or more of these stories flow through our bloodlines." Pairing up artists to produce works that honour their ancestors is the genesis for Sutton’s forthcoming project, Myths and Legends in my veins.... > Read more 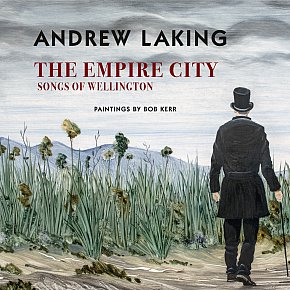 With historic photos, and subtle, evocative paintings by Bob Kerr (perhaps most fondly remembered for his terrific Terry and the Gunrunners comic book series), this book/CD by writer and songwriter/singer Andrew Laking sketches in a broad picture of moments, people and iconic places (the wharves) in the history of New Zealand's capital city. For those not familiar with what shaped... > Read more 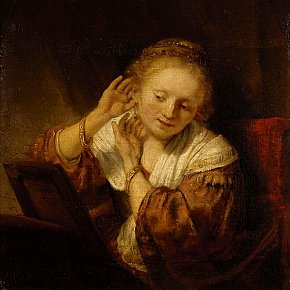 Try as we might, it's very hard for us to think of the Old Masters as contemporary artists. Yet in the time of Catherine the Great of Russia, that's exactly what they were. Catherine – a German married to Peter the Third whose reign lasted a bare six months — was one of the most acquisitive art collectors of any age, someone who dispatched advisors to collect the great... > Read more 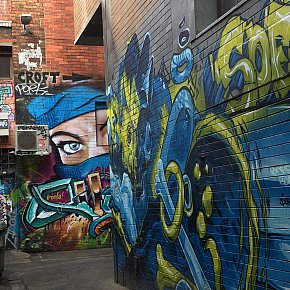 When Chris Hancock talks about his friends, mentors and inspirations, it sounds like some weird code. In short order he ticks off Dem189, Nost, Ha-Ha, Adnate, ELK, Rone and Steen Jones . . . who apparently ripped off Sailor Jerry. And so it goes as Hancock guides me around the graffiti-covered lanes of Melbourne where he — as a graffiti artist himself and something of a historian... > Read more 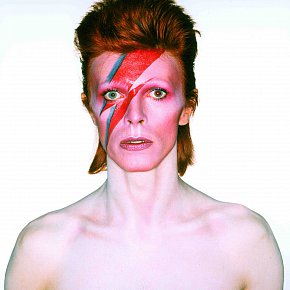 Even in an artistic life of oddity, irony, apparent contradictions and self-aware consistency, it still comes as a surprise that David Bowie left London – the city of his birth and where Ziggy Stardust fell to Earth – over 40 years ago. Aside from brief visits, he's never returned. David Robert Jones who grew up in suburban Sundridge Park, some 15km from central London,... > Read more In one corner of the expansive David Bowie Is exhibition which opened in Melbourne a fortnight ago is a video clip that many visitors walk past with barely a glance. In the exhibition at the Australian Centre for the Moving Image (ACMI) which contains dozens of his stage costumes, artwork and storyboards for videos, handwritten lyrics and other better known videos, this one can so... > Read more